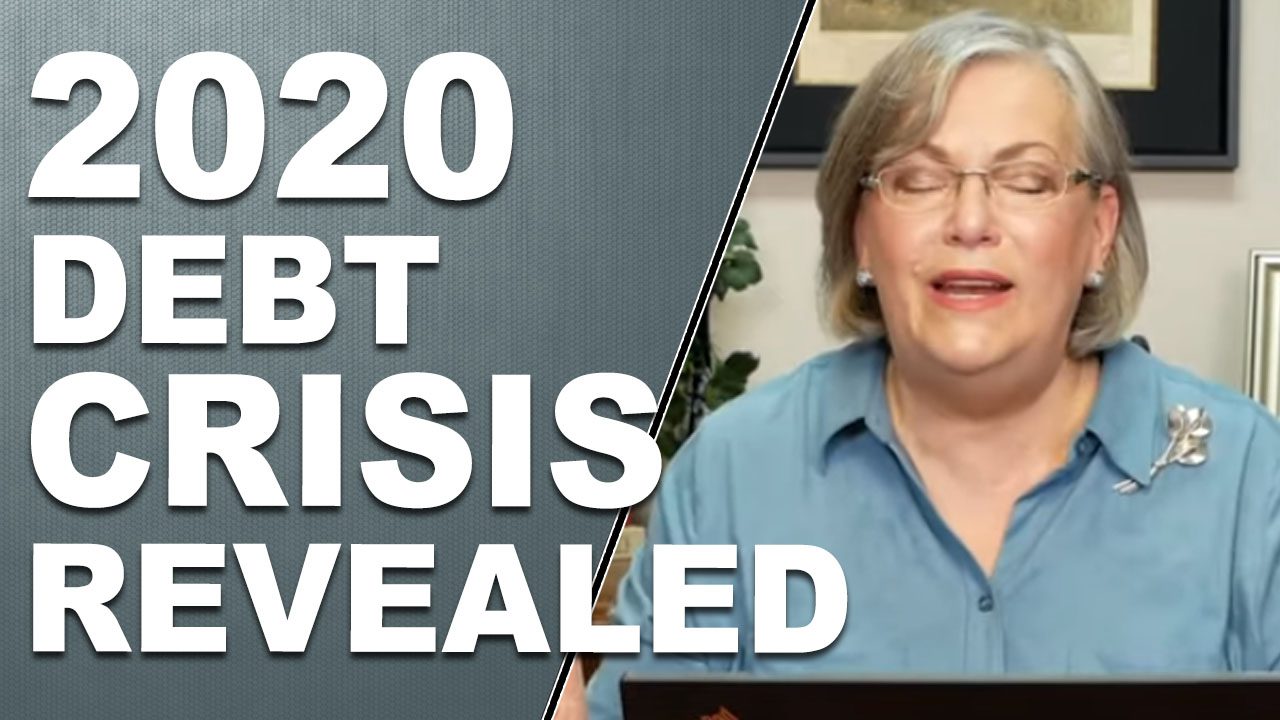 The Federal Reserve has now injected over $4 trillion into the repo markets and $326 billion in buying up short term treasuries to undo the yield curve inversion and prevent money markets from freezing up and its becoming visible to the public. Regardless of their words, designed to lull the public into a false sense of security, they are in panic mode.

And there are many reasons for this panic. A recent report by the Bank for International Settlements (BIS) revealed one of the “unintended consequences” of QE was a structural shift decay in the biggest banks “internal processes,” and knowledge that banks need to ensure the “prompt and smooth market operations.”

But that’s not the only reason for the panic. The 2019 Bank of Canada report on government debt defaults shows a huge spike in advanced economies government debt defaults. And while it is not as pronounced as during the European debt crisis in 2012 and 2013, the spike is very troubling considering the government debt doom loop with banks, where governments loan money to banks to buy government bonds. Lest you think the US is immune, consider that the four US banks that dominate the repo markets hold about 25% of the cash reserves in the banking system, but 50% of the Treasuries. This creates a liquidity mismatch because bonds are not as liquid as cash.

But wait, there’s more. The markets surged to new highs as a “phase one” US China trade deal was hinted at, but there is a bigger threat emanating from China. And that is a wall of looming USD bond defaults that is expected in 2020 that has already begun.

Tewoo is a SOE (State Owned Enterprise). Their recent default on USD bonds, the “largest failure to repay dollar debt by a state-owned company in two decades” is a clear indication of a “radical shift” in the Chinese government policy of government backing. S&P believes this is not an exception but has become the rule.

Why would the Chinese government issue USD bonds? There is much speculation about opening markets, to preventing the Yuan leakage, but no one really knows, at least, that I could find. Could this be a hidden weapon in the US/China trade war?

Does this tie China to the US or, since US investment in Chinese companies has infiltrated many US pensions, ETFs and mutual funds, does it pose additional market risk that could ripple throughout the global markets?

Many of my readers want to know how this impacts the gold and silver markets and wonder why we don’t see this in the spot market charts that have declined since hitting the peak in September. Keep in mind that you are looking at wall street’s tool of “perception management” whose purpose in to hide failing fiat currencies.

Central bankers know the truth, that’s why they’re buying the most gold in history. They know what a bargain it is and so do I. Do you? 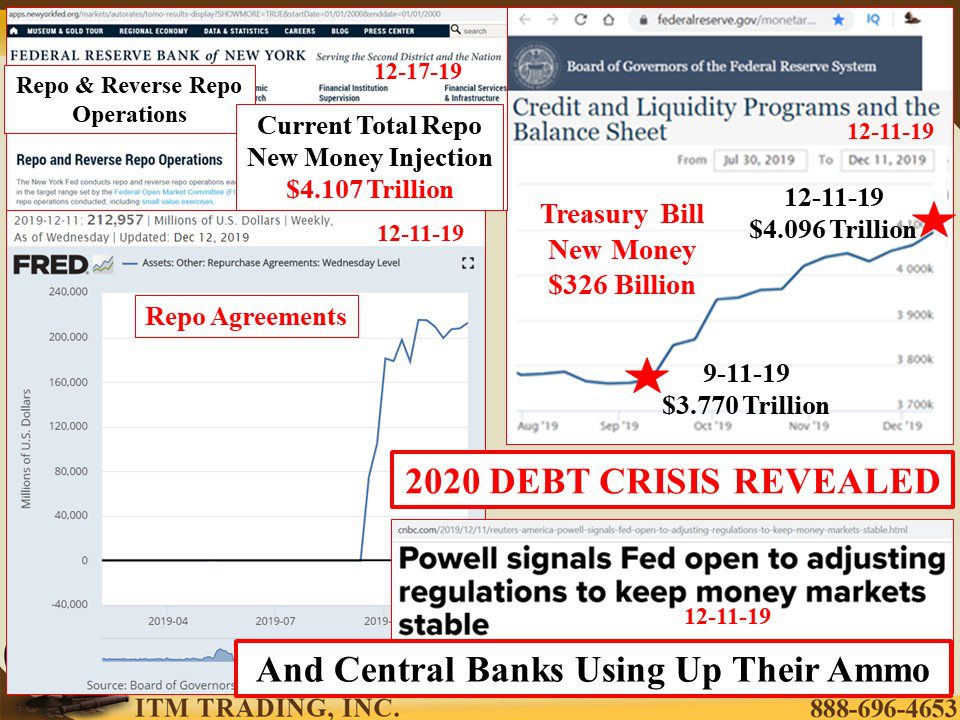 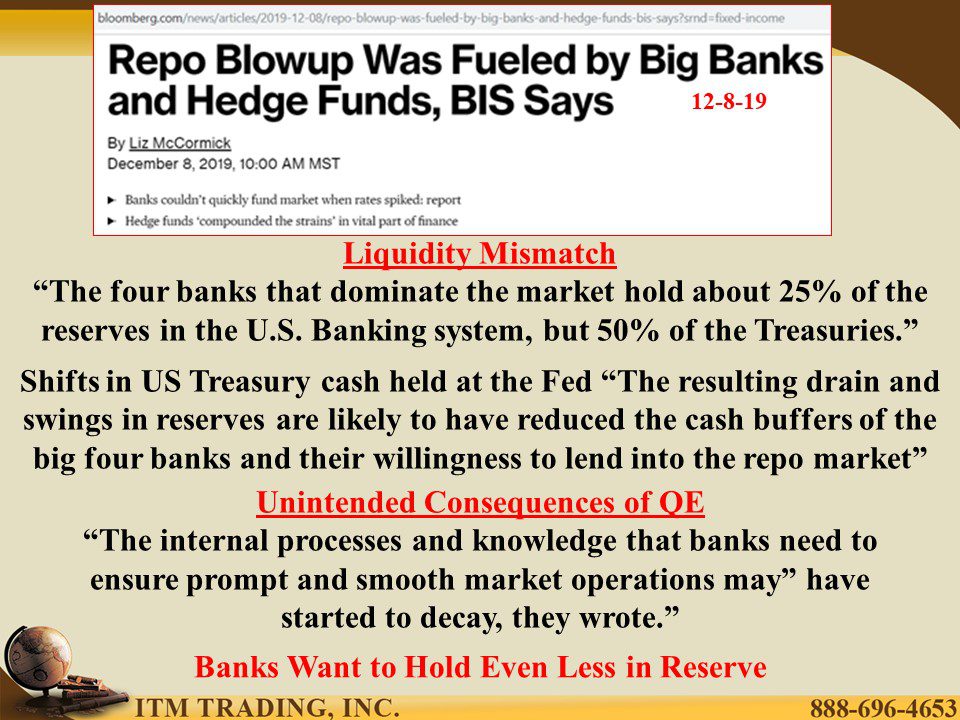 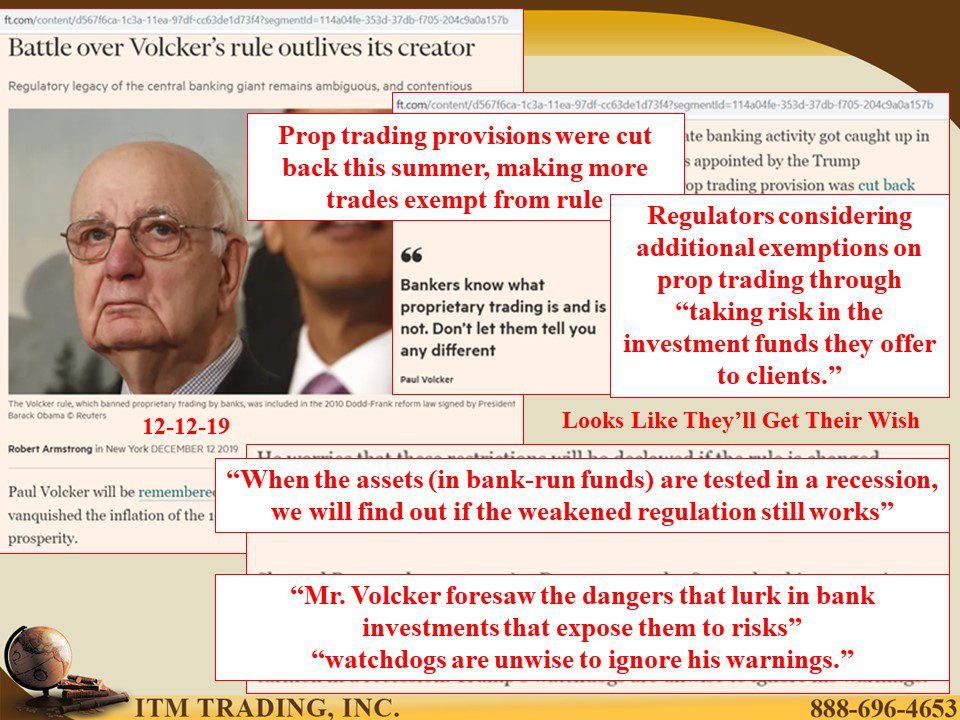 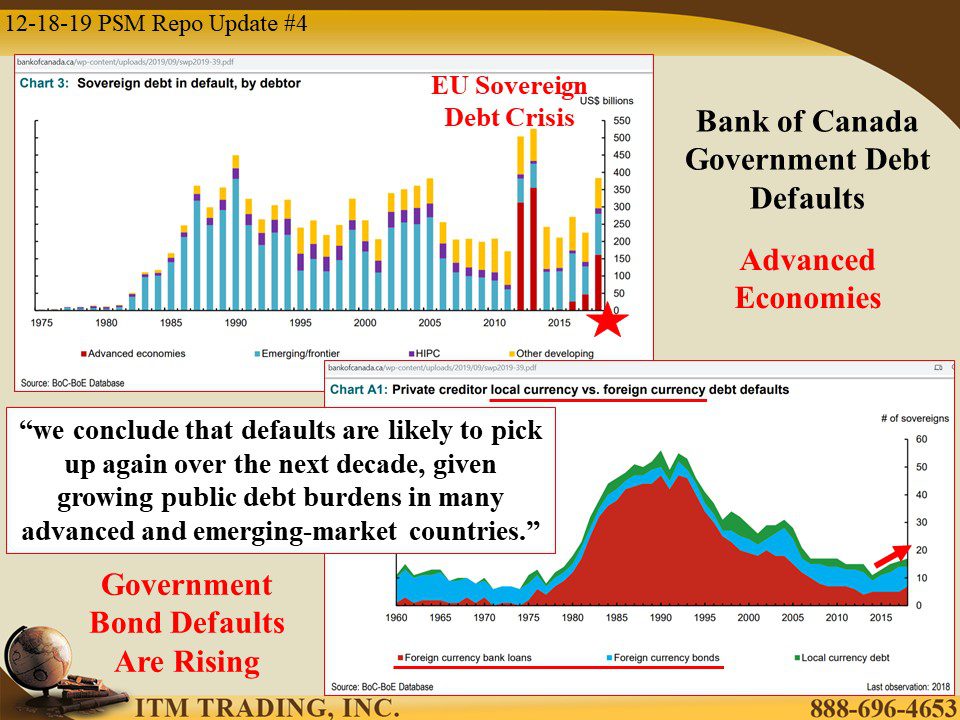 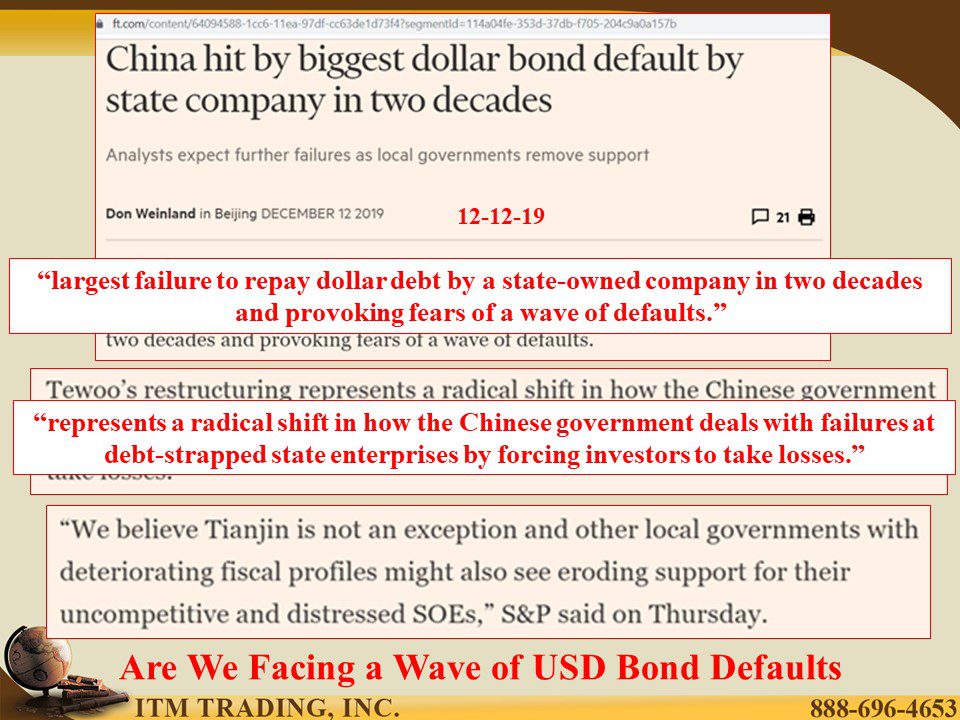 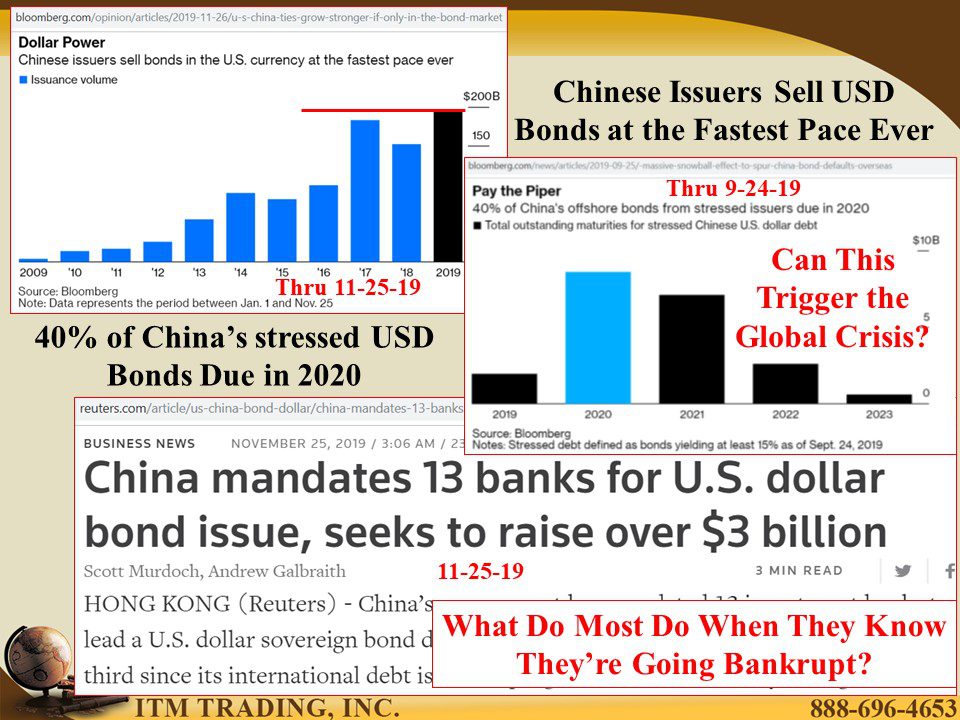 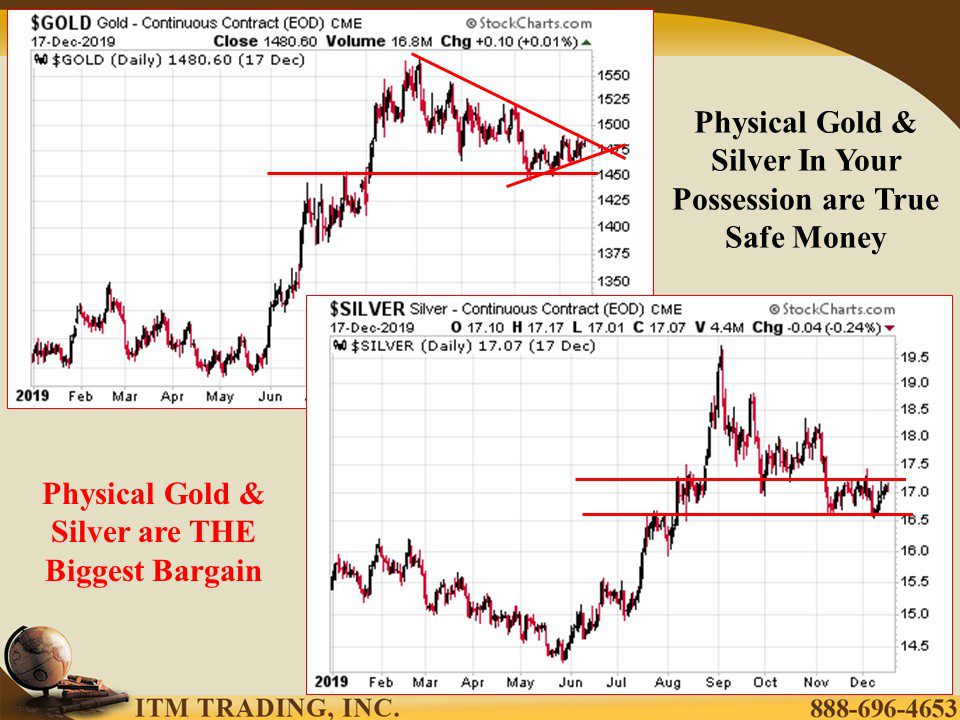 The Federal Reserve has now injected over $4 trillion into the repo markets and $326 billion in buying up short term treasuries to undo the yield curve inversion and prevent money markets from freezing up and becoming visible to the public. Regardless of their words, designed to lull the public into a false sense of security, they are in panic mode and using up their last ounce of unlimited money printing credibility.

You think the trade war with China as the biggest threat? How about a default wall that is expected to explode in 2020. Central Bankers are buying gold at bargain fiat prices, me too. Are you? 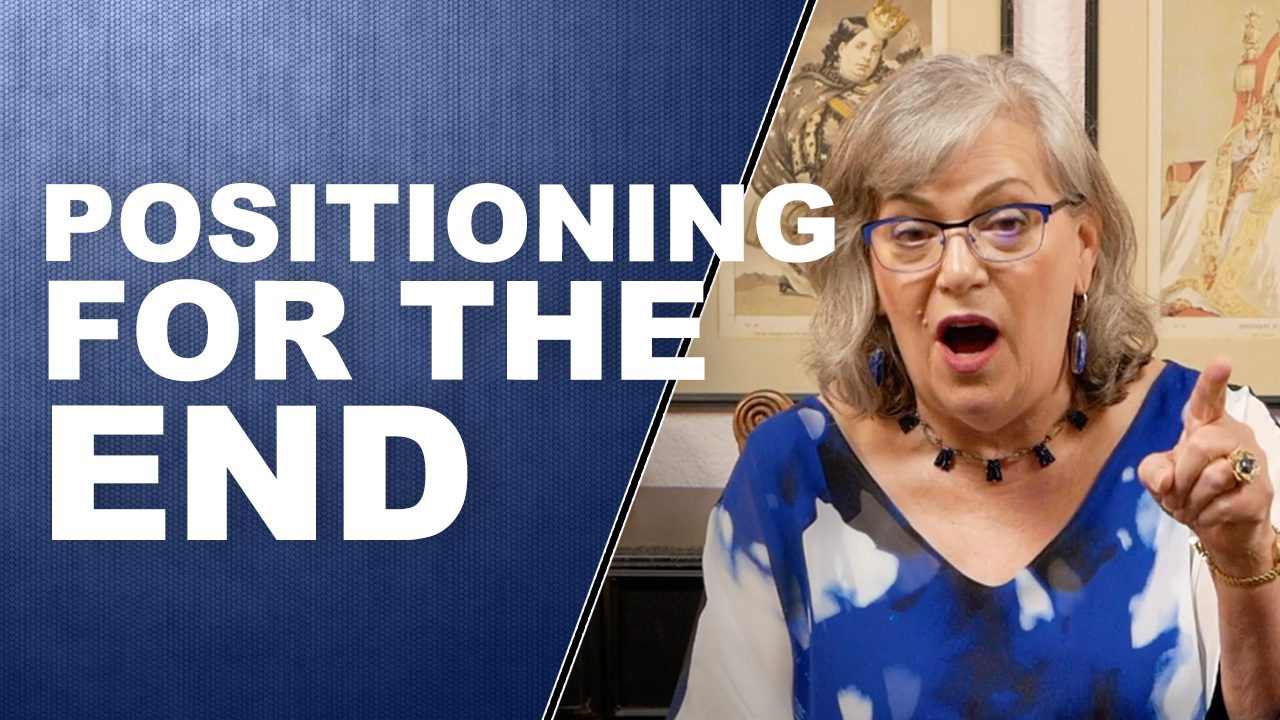 POSITIONING FOR THE END: Banks No Longer Required to Reserve Your Funds…by LYNETTE ZANG 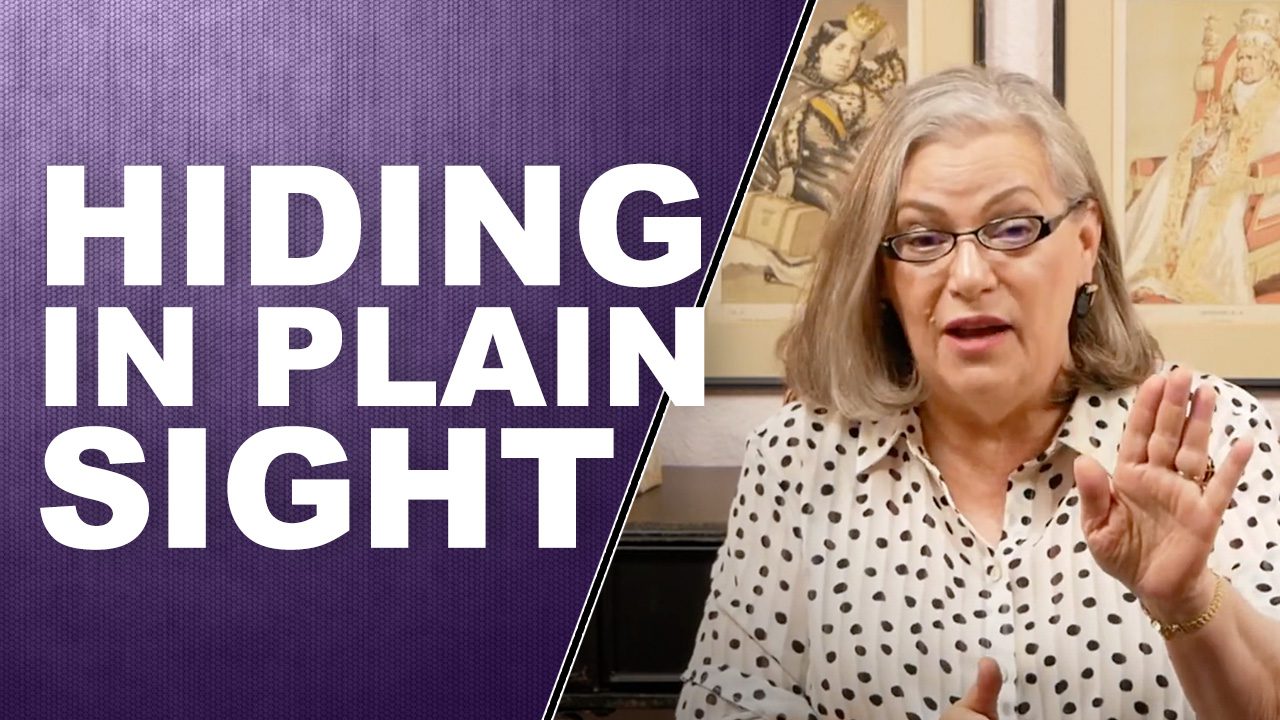 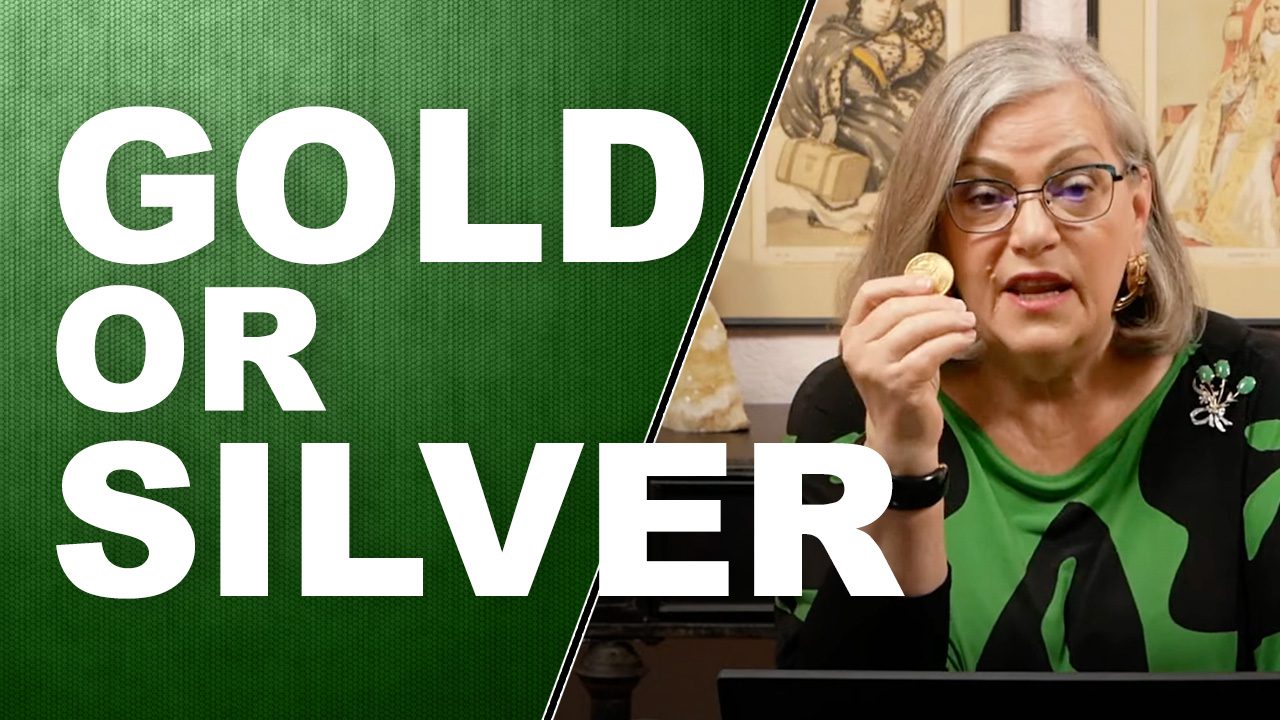 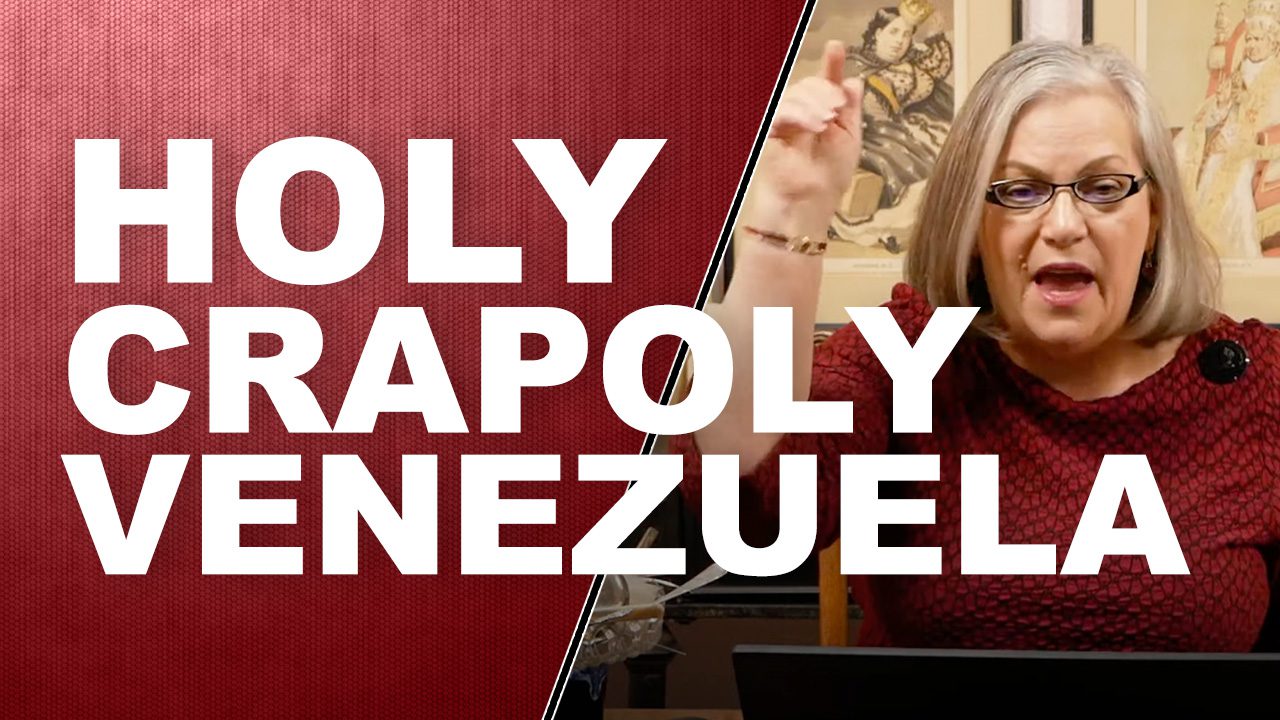 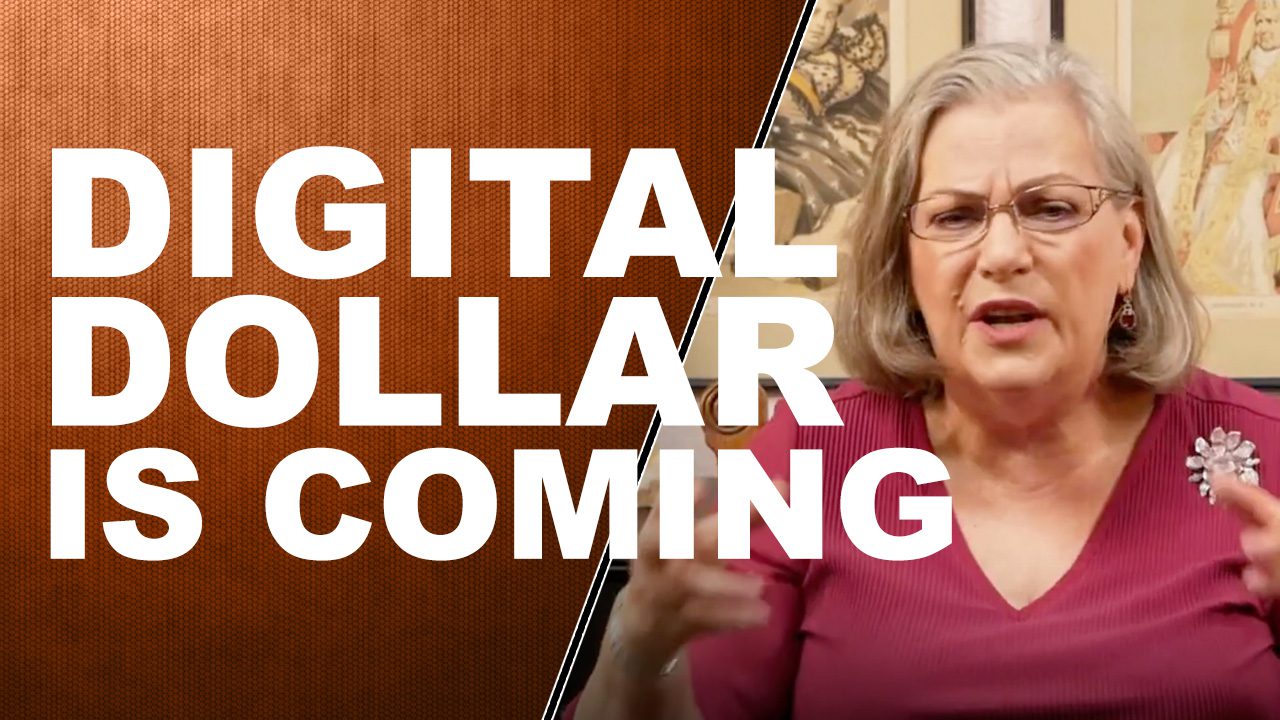 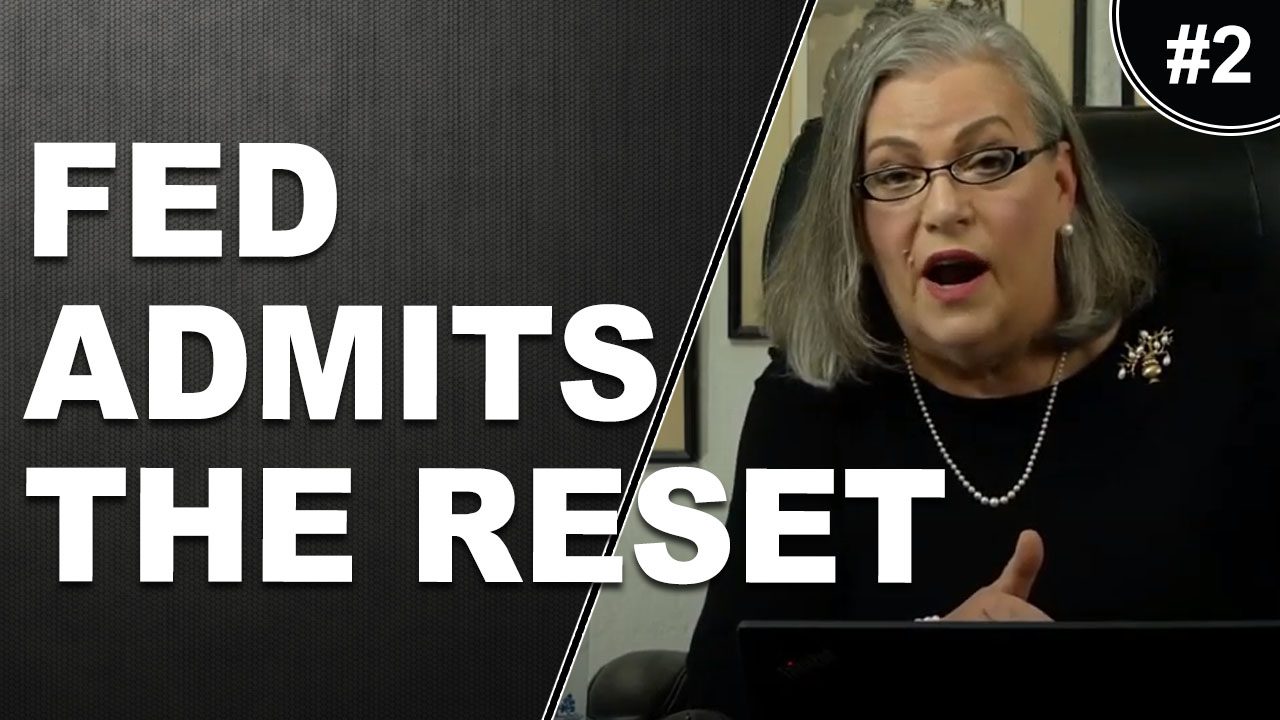 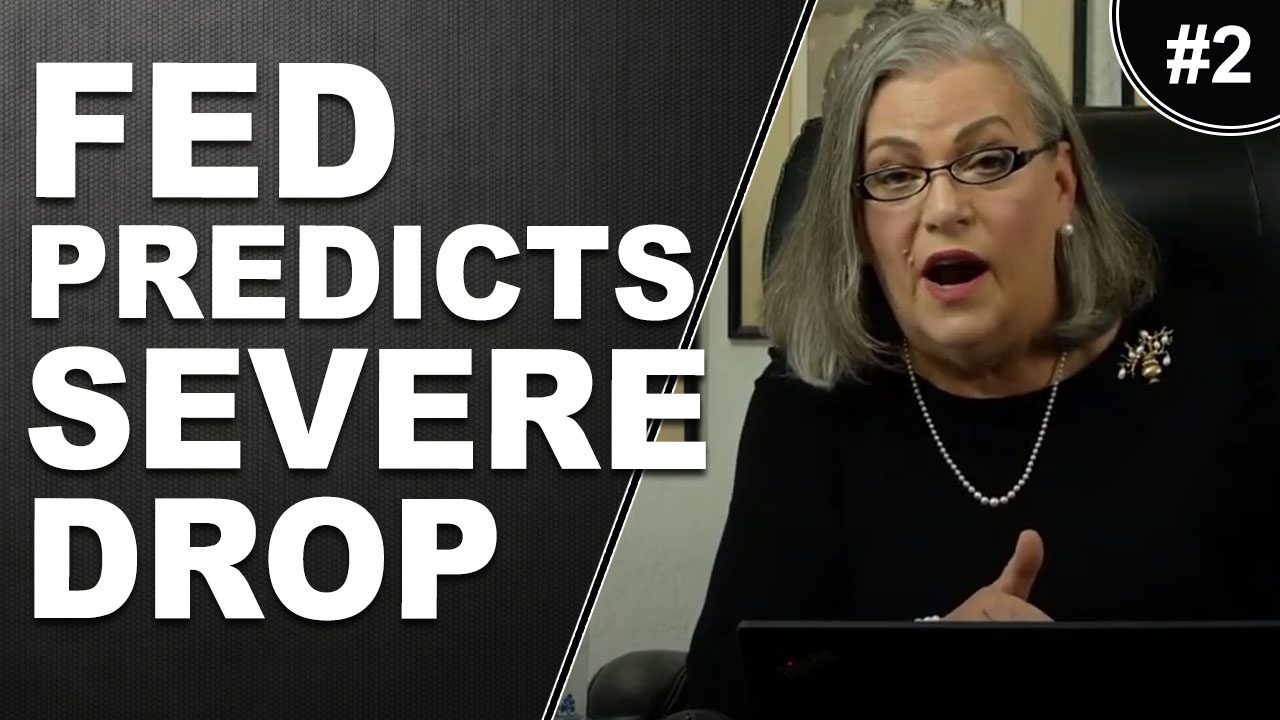 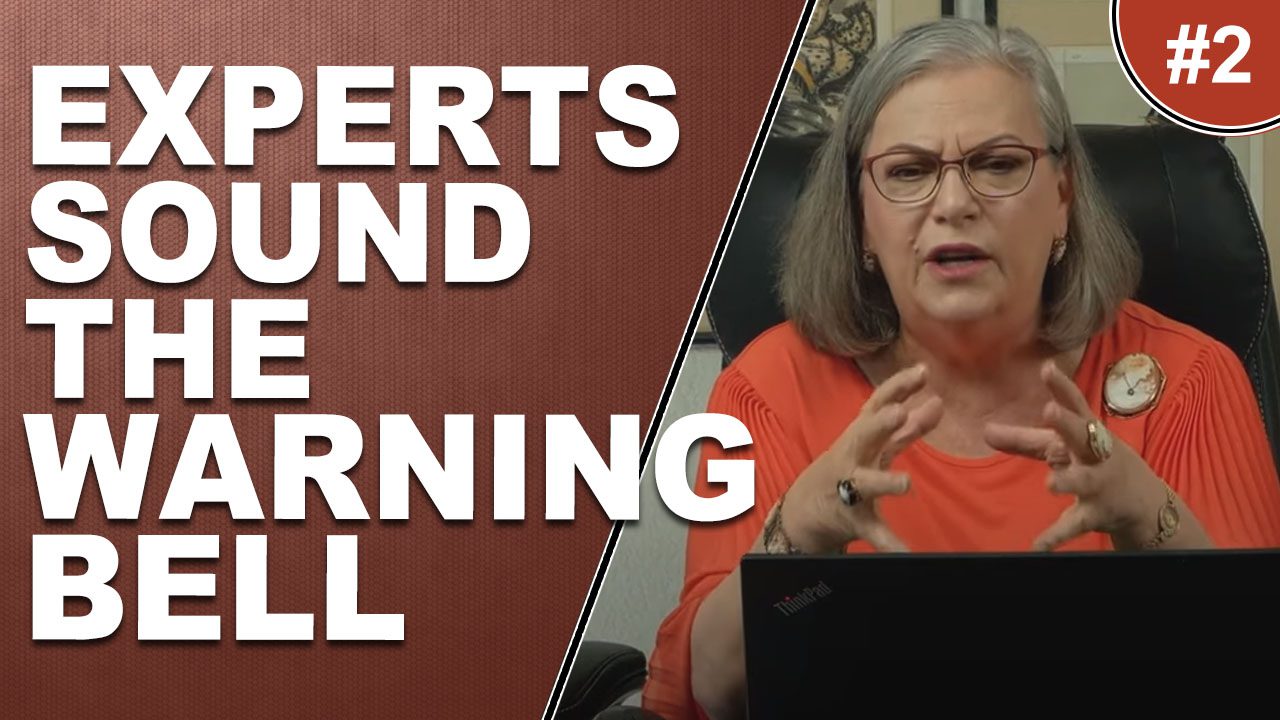