Those who Buy Gold have been enjoying

an advancing for over 10 years now, from a low of $252 per ounce in 1999 to where it sits today at $1,755, which is a gain of over 595%.  With gold at unprecedented levels (previous bull market high was $850/oz) is it any wonder why someone would question starting to acquire gold?  I can certainly understand the concern; especially since so may people lost so much money during the bursting bubbles of the NASDAQ and real estate.

Typically bubbles in any asset are created when the general public is participating in a big way, which I can say with confidence hasn’t happened yet.  This is why we at ITM Trading believe we are years away from a bubble forming, although panic buying by the public could occur at anytime.  At some point the mainstream media will jump on the bandwagon of gold, this will be a signal to all of us that we could be getting close to a bubble or top in the market, but until then we can all ride gold all the way up.

Another reason why gold should continue to rise long-term is that gold is a hedge against paper currencies.  As the government continues to print money to pay its debts the value of each dollar declines.  With the recent downgrade on the US credit rating many people will say that a default by the US has zero risk because the Fed can print money.  But as Marc Faber puts it, history is full of examples of nations essentially defaulting on their debt – not by refusing to pay their creditors, but by paying them back in “a worthless currency.”  Therefore owning gold as a hedge against money printing is a good idea as it seems this trend will continue, thus pushing gold higher.

How high gold will go is anyone’s guess, and with predictions all over the board it is obvious that no one knows for sure. Here are a couple of facts to use as a guide. For gold to reach its inflation adjusted all-time high it would need to breach $2,300 per ounce. For gold to achieve the same gains it did in the 1970’s (2,400%), gold would need to breach $6,000 per ounce. Hyperinflation due to money printing could take it much higher than anyone could imagine. Anyone want to buy gold? 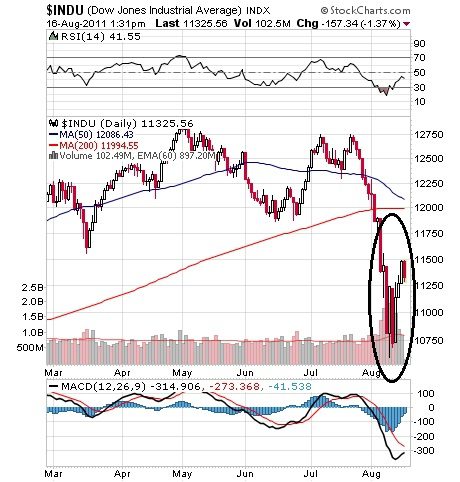 Two Paradigm Shifts On The Dollar And Gold