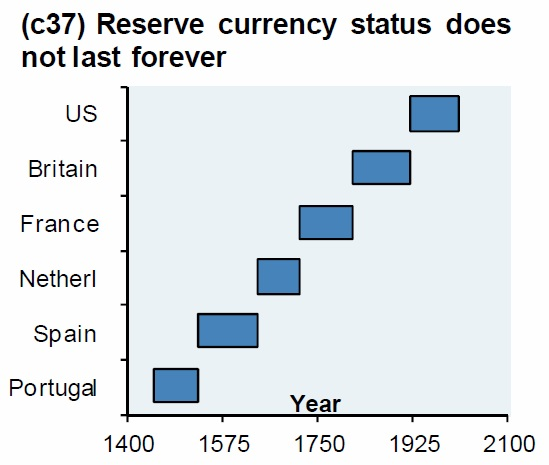 In May 2005 Russia announced that their natural resources and other assets would no longer be valued in terms of dollars but from here forward, be valued in terms of rubles, euros and gold. This announcement was the start of the transition into the second phase of the bull market in gold and the bear market in currencies. I’ve been saying since then that the dollar had already lost total reserve status, it just retained the title. The decoupling of gold from all of the currencies took place that June and the transition into the second part of the trend was completed in May of 2006. 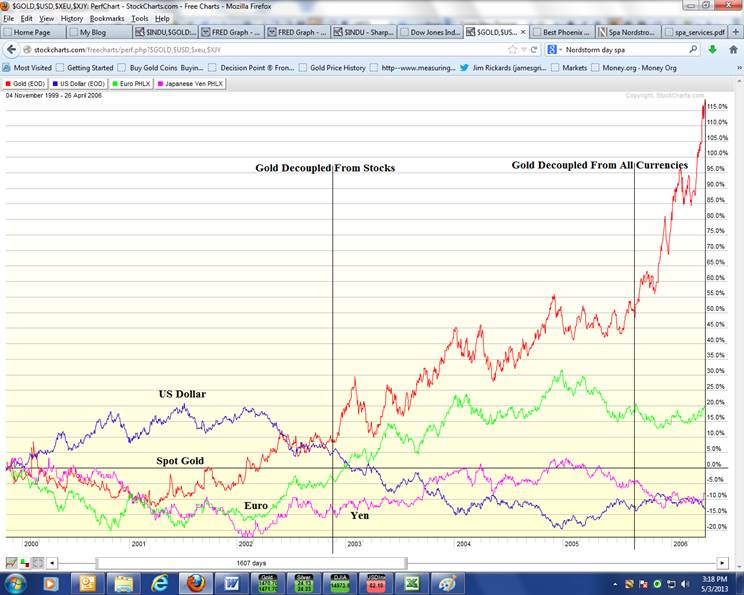 You can easily see the currencies used in global trade settlements in the following chart from the WTO (World Trade Organization). As you can see the Euro is more widely used than the US dollar. 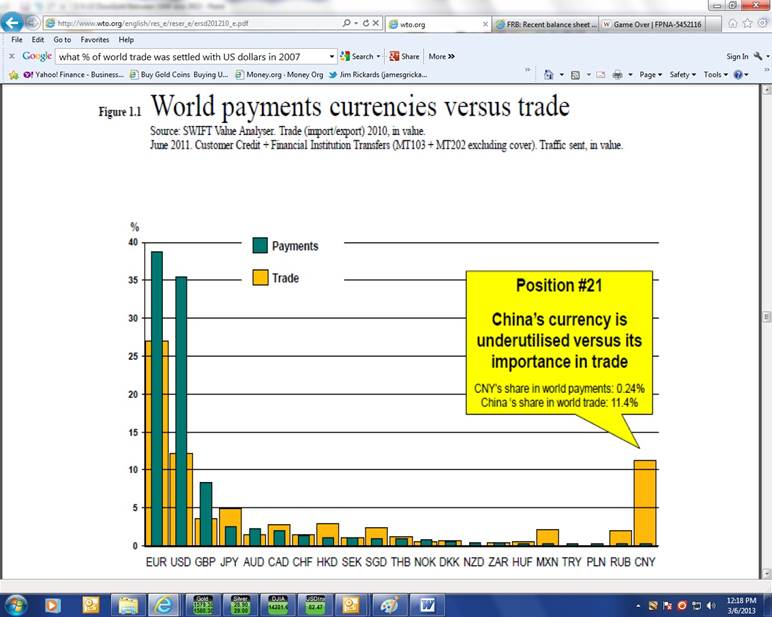 In 2008 the SDR (IMF currency), which has been around since 1969, was shifted from a non-convertible reserve asset (you could not use it to buy (convert) oil, lumber etc.) into a fully convertible reserve asset and since then, as of September 2012, every central bank, government and global corporation has been given 5000% more SDR’s than they had prior to 2008. In 2011 they published the template of how they would roll out the SDR as the world’s reserve currency. The only thing they lacked was a broad and liquid bond market, and they’ve been working on that ever since. The SDR is composed of several currencies and the IMF has the ability to change the composition at will. The SDR as the world’s reserve currency keeps the power in the hands of the central banks, but it also eliminates the need for one country to run perpetual deficits as the buyer of the world.

Jim Rickards’ explanation of how they will shift into the SDR:
http://www.kingworldnews.com/kingworldnews/Broadcast/Entries/2011/2/26_Jim_Rickards.html

Any currency is a tool of barter based upon a coincidence of wants. When one goes away, another takes its place. The challenge is that all fiat (contractual by government decree) currencies are inflating the remaining purchasing power away through open ended and unlimited money printing. 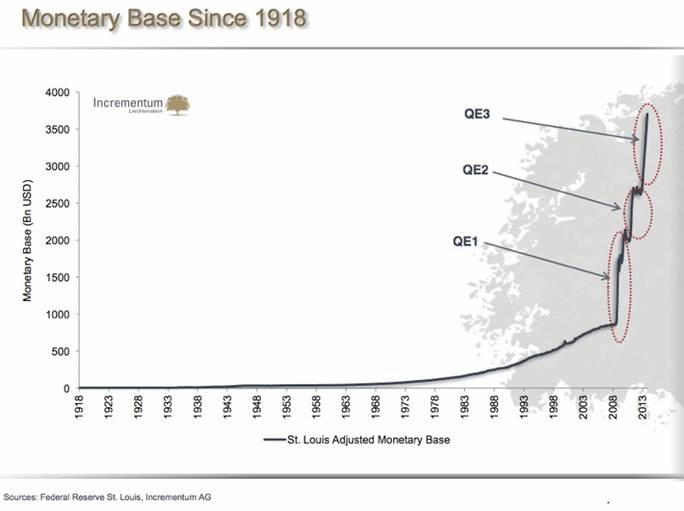 And even as Janet Yellen announces another round of “Tapering”, supposedly reducing treasury issued bond buying and MBS buying (Mortgage Backed Securities which is a derivative) the following charts pulled today, indicates the lie in those words. 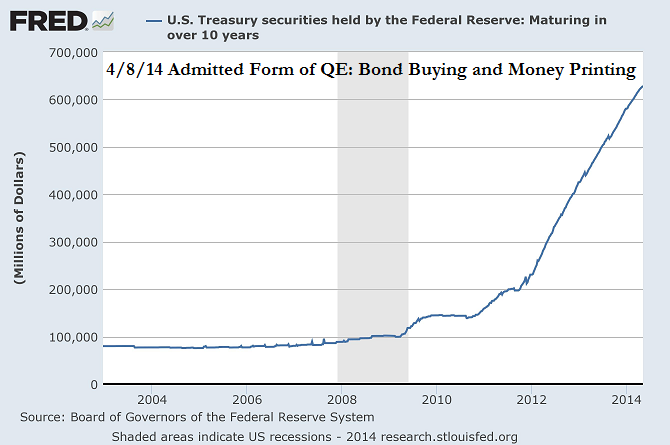 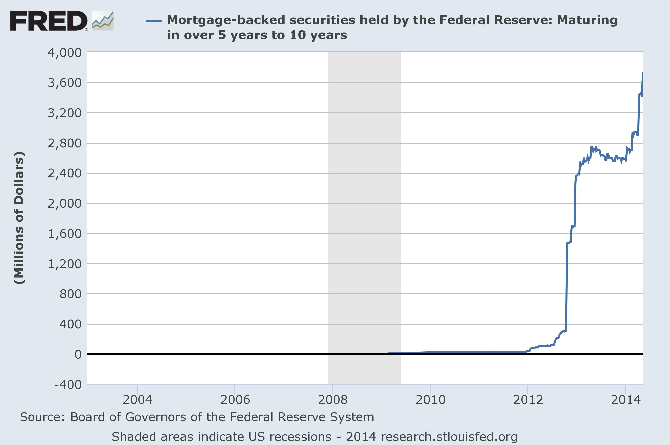 Yet at every announcement there is a massive money move to make sure the banks are secured. Ask yourself why the need to secure money in the banking system if everything is as good as they keep telling us? 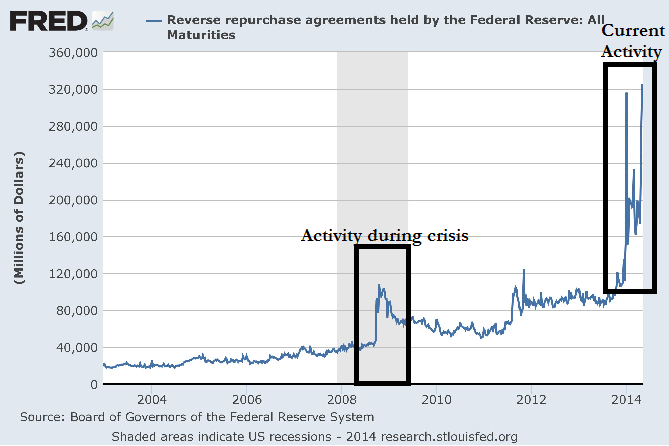 With all of this new money and all of the talk of how well the economy is doing. The following chart reflects the speed at which money is changing hands, in other words, how stimulated the economy is. 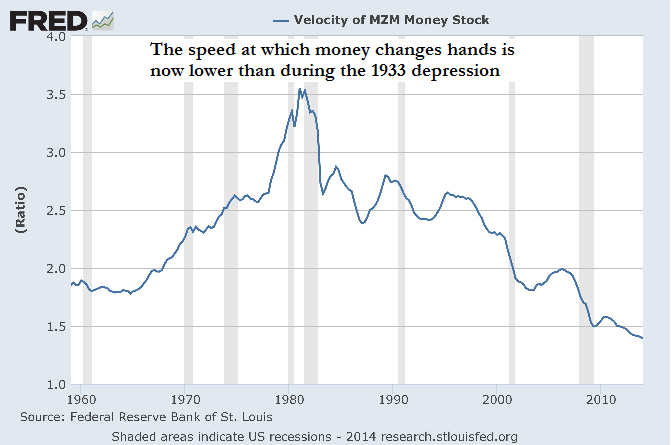 As an aside, the above monetary velocity chart is the one to watch as #17 is  beginning to be executed. #17 is when they begin to charge the banks, instead of pay the banks, to hold those excess reserves (which we give them tax dollars for almost free). There is the potential to unleash a tsunami of all that newly created money into the economy because in fractional reserve banking, the banks have the right to loan 10 times the reserve amount into existence. 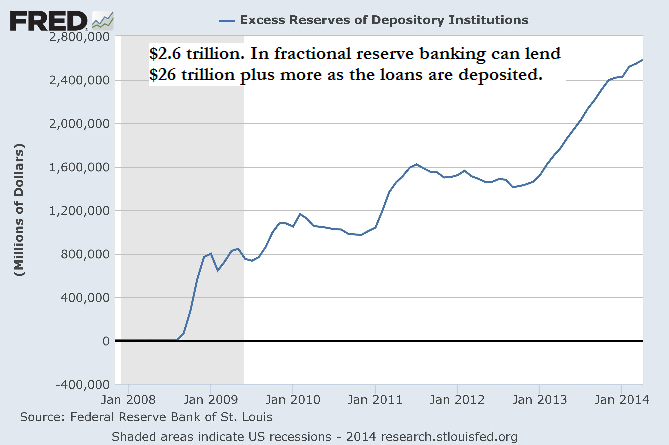 When that happens you will see the velocity of money spike and inflation heat up even more quickly than you are currently experiencing, destroying the rest of the .04 cents left in the U.S. dollar. 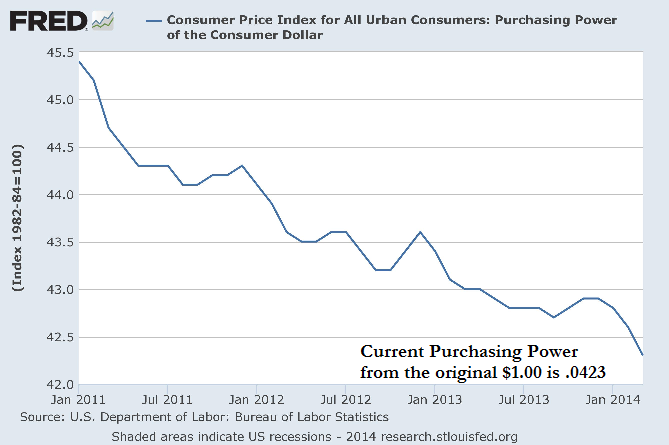 Thus the importance of gold, the primary currency metal and the only “good” currency whose most important market function is to hold your purchasing power over time.

Quite simply, the spot market is a lie and does not reflect true supply / demand dynamics or true fundamental value. As I’ve shown in many previous pieces, physical demand far exceeds physical supply.

Can they create computer generated gold and suppress the spot price? Of course they can. It’s your choice to believe this lie and be vulnerable. But soon, and I think this could happen any time now, the lie will not be enough to suppress the physical market any more.

This is what spot is likely to look like when that lie is understood:

The following chart shows where we are in terms of trends. 7 years later those not paying attention think everything is OK. I hope you can see the lies. 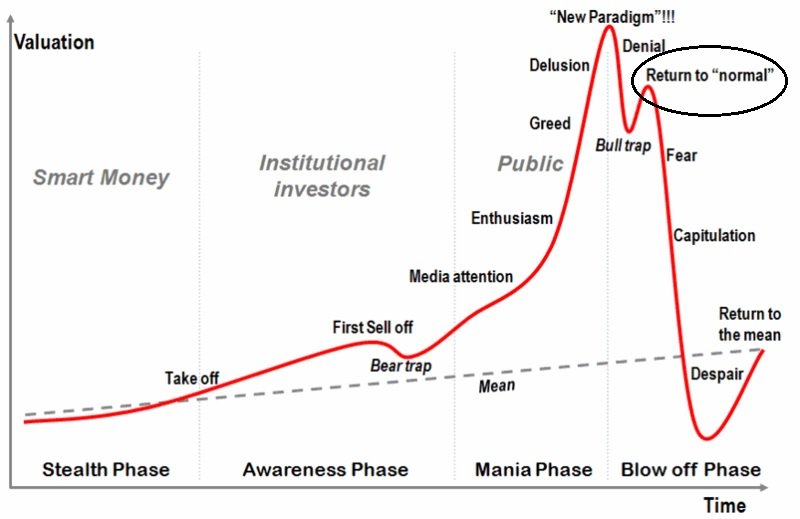 And finally, this table on gold during the Weimar Republic’s German mark collapse: 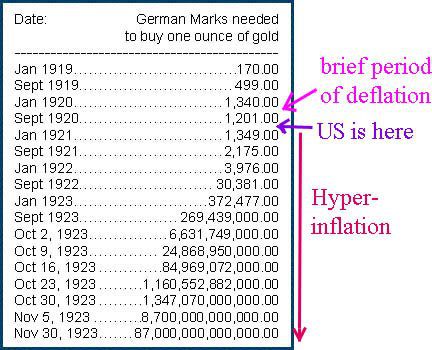 Wow, an ounce of gold went from 170 marks to 87 trillion marks per ounce, but the mark had more value as kindling. You could not even convert it into a loaf of bread.

The bottom line is that every currency today is fiat, in other words, a contract created between governments and central banks.

Look at the difference between the bills in the picture below. The top bill is a $20 Gold Certificate Payable in Real Money Gold To The Bearer On Demand. Clean, simple and easy to read, when our money was “As Good As Gold”. This too was a contract, but it was between the Treasury and the Individual. On demand you could convert this contract back into real money gold.

The bill below was printed in 1914, just after congress entered into contract with the private Federal Reserve. On the top and bottom of this bill it says, “Federal Reserve Note”. A Note is a debt instrument (contract) and the Federal Reserve owns it. They will pay the bearer on demand…$20. Of course in the very tiny print on the back of the Federal Reserve Note, it does say that you can convert it into gold, but it is obvious this is no longer a gold certificate. Also in the very fine print they say this is legal tender, in other words “fiat”. The government has now declared this is money and you must work for it and use them as your tool of barter, and so the theft of our purchasing power began.

That, of course, was the beginning and now we are dealing with the end. How much longer can they keep this con game going? As long as the masses place faith in the central banks or the central banks are ready for the final wealth transfer. I, for one, do not trust them because I know how to understand their language. They tell us in so many ways, what they are doing, it’s just that most people cannot believe what they are living through. But every  time a central bank tells you they have not hit their inflation target, they are telling you that the dollar is overvalued and their goal is to rob you of even more purchasing power. Ask yourself why you are agreeing to a contract that guarantees you lose what you have worked for and tried to save for future use.

Most people think stocks or bonds will make them money. But unless you can generate more new dollars faster than those dollars lose in purchasing power, your standard of living will decline. And those are all based upon contracts not written for your benefit too. As those in Cypress, England, Poland, Russia, and Slovakia have learned over the past year, if you don’t hold it – you don’t really own it, and if they want it, they take it.

Anyone whose pension was turned over to the PBGC or owned shares of GM, AIG, Fanny Mae or Freddie Mac etc. before they were “Nationalized” etc. has also experienced this theft.

The following is what I put my trust in, real money that holds my purchasing power and wealth over time, regardless of short term market manipulation: 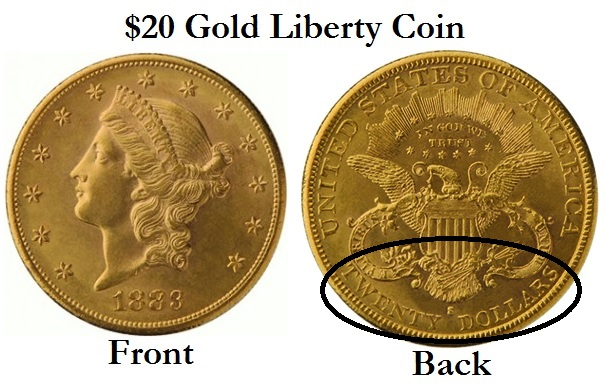 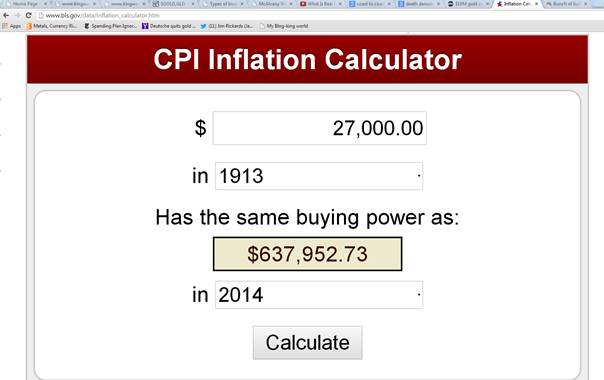 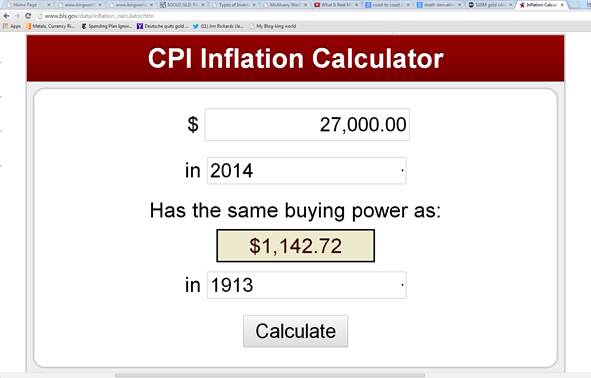 If you went just by the spot gold price, $1,340.50, and weight, 1,402 oz., in terms of today’s fiat dollars those gold coins are valued at roughly $1.9 million. But because these are rare numismatic coins, the approximate current market value is $10 million.

Now THAT is wealth preservation. Not contractual money whose fee is inflation until there is no purchasing power left. They told us in September 2012 that they were ready for the end of the current class of fiat currencies. They are showing us they are willing to print our purchasing power into oblivion. They have shown us openly that banks are more important than the workers and savers (us). I believe them. I own physical gold coins and silver coins and I cannot own too much.

Our Risk Information and Purchase Policy documents state the official position and advice of ITM Trading Inc.  Our consultants are encouraged to communicate with you but have no authority to contradict or give advice inconsistent with the official documents. To read those documents go to:

Please consult with your financial advisor before making a purchase.
[Get a Free gold investors guide home delivered]

Gold Is The Wisest Asset