Below is a link is to an interview between ITM Trading’s President, Craig Griffin and author Jim Rickards, who wrote the book “Currency Wars” and more recently, his new book “The Death of Money”. Many of you know that I think Jim is a genius. I’ve pulled some notes from the interview and then put in the OCC (Office of the Comptroller of the Currency) quarterly report on derivatives in the FDIC insured banking system. If you don’t understand why this is so important, you need to call or email me. We are in the third phase of this trend and it’s about to get even more interesting. The following link is to that interview with notes below:

Much of the interview focus was on the derivative market. A derivative is “derived” from something that may or may not exist. Once created the relationship ends because you can never convert that derivative into what it was created from. These transactions are unregulated (though they say this will be corrected in Dodd Frank), off balance sheet and have no reserve requirements. They are simply extremely big bets made between a small group of banks and shadow banks. As long as everyone supports the derivative, no problem, but if one of the players defaults there is a very nasty domino effect. You know this is true because we are still dealing with the effect of the subprime bet gone bad in 2007. These bets are so complicated that even the creators don’t fully understand them.

Derivative risk is in the gross exposure to derivatives, not the nominal (theoretical size that may vary from the actual) exposure, which is how derivatives are expressed in the voluntary reporting of derivative positions banks and/or shadow banks hold. From the current OCC report on Derivatives in the FDIC Banking System, “The notional amount of a derivative contract is a reference amount that determines contractual payments, but it is generally not an amount at risk.”

Before the BIS changed their accounting procedures, they reported the gross reported exposure at 1.44 Quadrillion. But even in nominal terms, the exposure is 10 times the global GDP (all funds that move through the global economy). When you triple the system you exponentially grow the risk.

According to the OCC report found here: 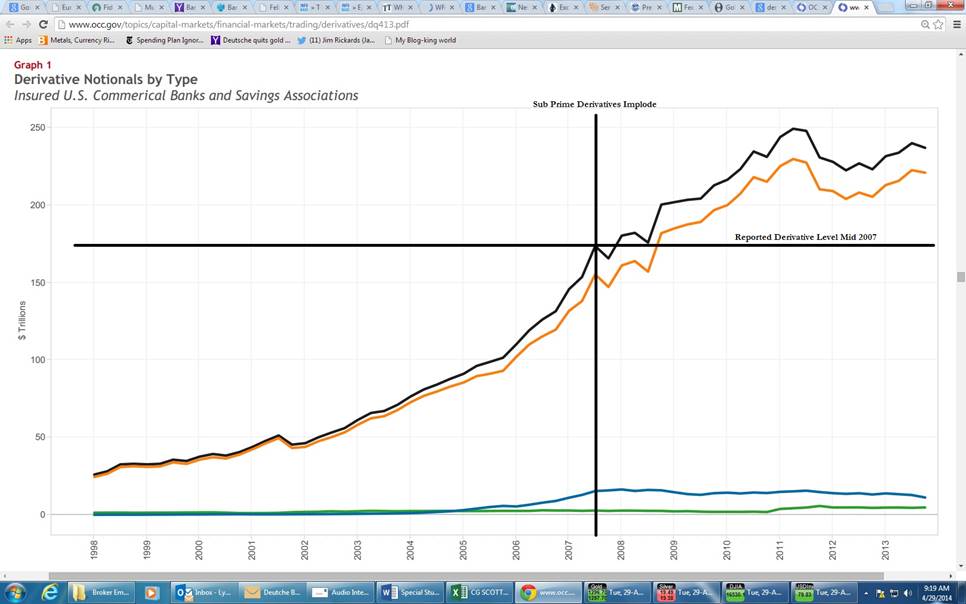 Since the system is larger than it has ever been, the risk is also bigger than it’s ever been. When the system imploded in 2007 the Federal Reserve and all of the global central banks, grew debts and new money at unprecedented levels to hold the global financial system together. The following chart reflects some of the global central bank’s balance sheets percentage change since August 2008. As you can see below, even the most conservative balance sheet increase was up roughly 40% and the US is leading the pack up roughly 340%, though the Bank of England is not far behind. The total in terms of US dollars is fast approaching $20 trillion. 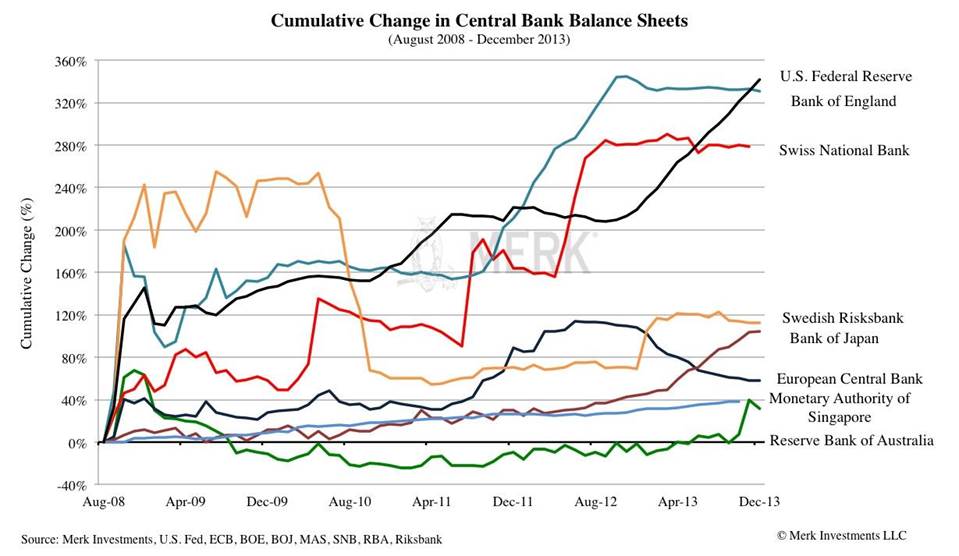 I’d also like to point out that the composition of the balance sheets changed dramatically as the central bank’s bought illiquid derivatives off of the bank’s balance sheet to shore up the private banking system, transferring the risk from the private banks to the public taxpayers without having to go through Congress for approval because Central Banks are private corporations supposedly independent of governments. This is why they have never been audited and do not need congressional approval.

Rickards pointed out that Central Banks were created to support the banking system and not the economy. There is certainly a lot of evidence to support this as the divide between the 1% and the 99% grows wider (will be discussing this soon), but you can easily see in the chart below that all of this new debt and new money created have NOT had a positive impact on the global economy regardless of what the talking heads blah blah blah say. 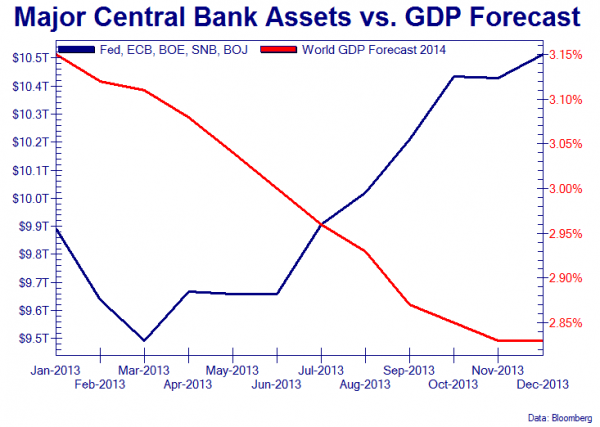 The following graphic shows the growth of banking consolidation. 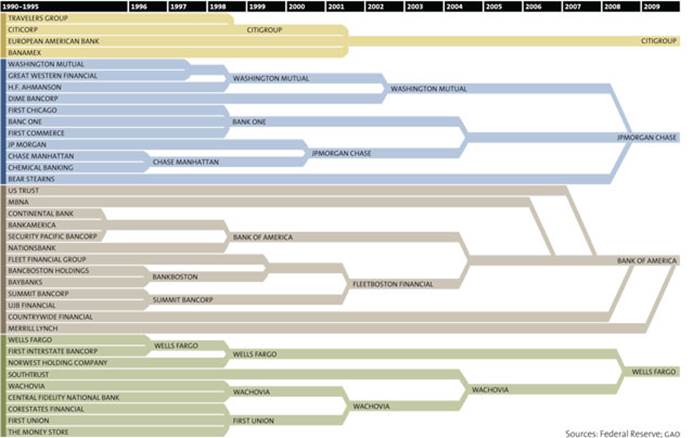 The OCC quarterly report on derivatives in the FDIC insured banks confirms the concentration. “Derivatives activity in the U.S. banking system continues to be dominated by a small group of large financial institutions. Four large commercial banks represent 93% of the total banking industry notional amounts and 82% of industry NCCE.” 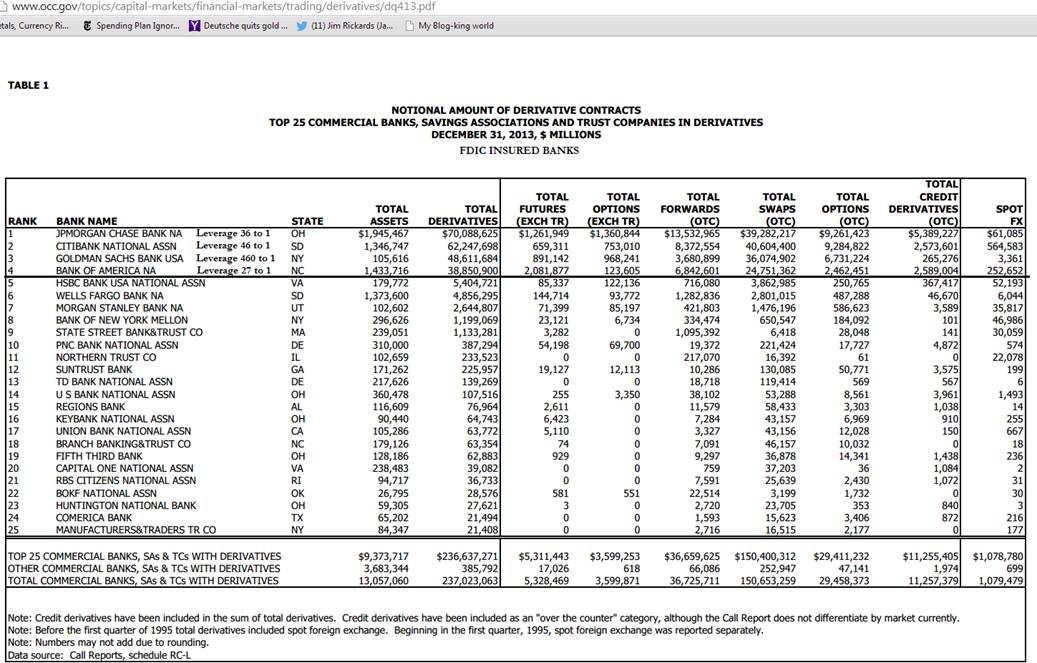 Even Warren Buffet calls derivatives weapons of financial mass destruction. So what is the biggest threat? Interest Rate Derivatives. 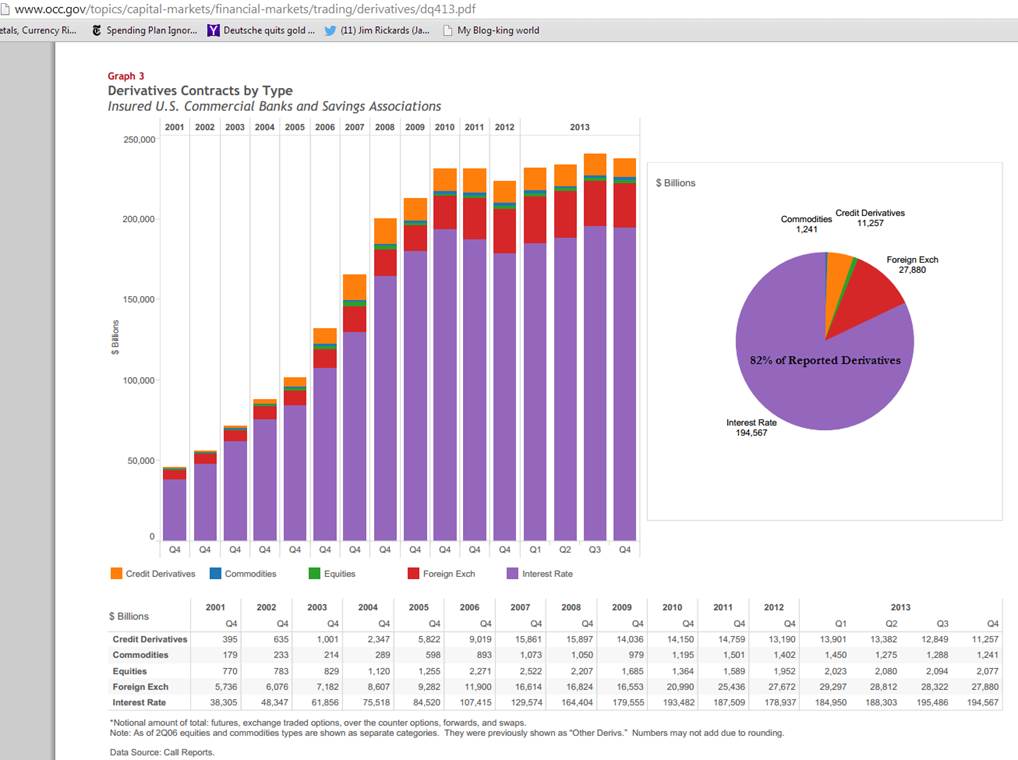 So while most people think that bonds are safe, when interest derivative bets are placed, the entire financial system is at risk at some level of interest rate increases. I do not know what that level is, but my guess is somewhere north of 3% there will be a derivative event kicking off the next visible financial crisis.

Rickards points out that crisis’s are hard to contain because of how interconnected the global banking system is. The following graphics are from an IMF report on this issue found here:

The graphic on the right shows you the small group of derivative creators and traders. Since this is an incestuous group, trading amongst each other, off balance sheets and no reserves required, if one entity cannot meet their obligation there is a chain reaction amongst them all. Remember when we bailed out AIG so they could pay out the derivative contracts 100 cents on the dollar. Here is a link to PBS discussion on this: 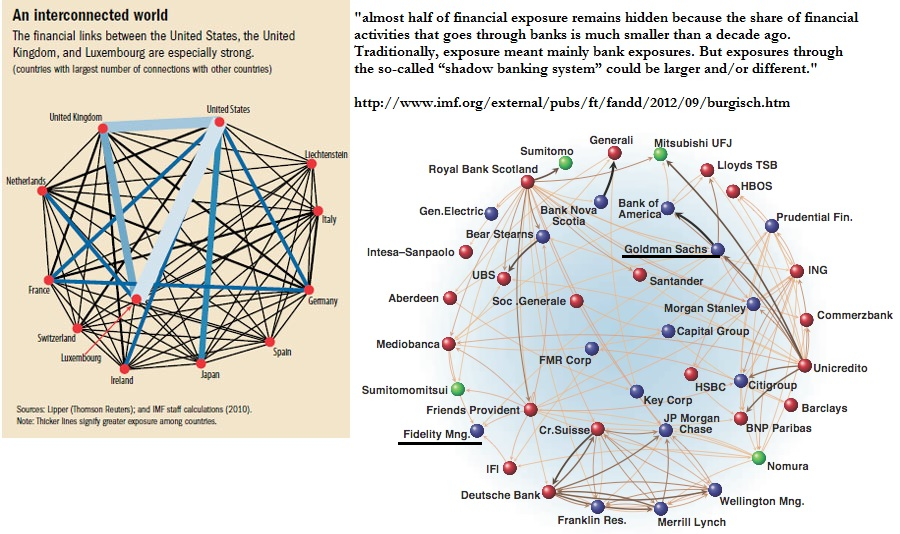 The other issue that pops up during financial crisis is that if you need to raise funds, you sell what you have to and not necessarily what you want to. This spreads the crisis to other areas of the markets. As he says, “If I owe you $1 million I have a problem, but if I owe you $1 billion you have a problem because you have to collect it.” So how do you collect $1.44 quadrillion or even the $195 trillion in interest rate derivatives in just the FDIC Insured Banking system? First they’ll take your deposits, which are really loans to the banks (Bail In Clause) then they’ll take the rest of the purchasing power of the currencies which they announced in September 2012 with open ended and unlimited money printing.

Are you ready? I cannot tell you the day we run out of time, but in my technical opinion, we are in the beginning of the third phase of this trend. This is the part of the trend when these things happen. Food, water, energy, security, barterability and wealth preservation. Get it done. And don’t forget, I’m here to be of service.

Our Risk Information and Purchase Policy documents state the official position and advice of ITM Trading Inc. Our consultants are encouraged to communicate with you but have no authority to contradict or give advice inconsistent with the official documents. To read those documents go to:

Please consult with your financial advisor before making a purchase. 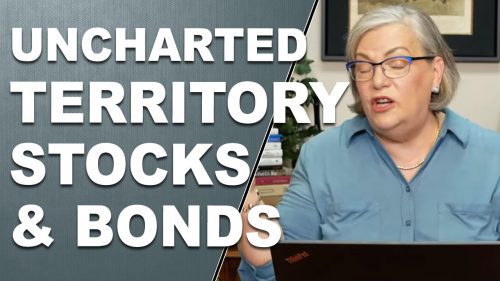