Whenever a year ends there are those that search for meaning in annual and year-over-year price differences. Realistically, no one invests 365 days at a time. Long-term investments are what most Americans trust and contribute to. However, there is important data and information to be gleaned from looking at the price changes that have occurred in the last twelve months or so. And, as humans, part of our nature is to learn from the mistakes of others, and this helps us. Another part of our human nature is to ignore or put off doing things we should do, like monitor our investments, and this part of our nature hurts us. This article will look at some of the worst investments of 2016 across all asset classes, including commodities.

Oats were down 11.26% in 2016. If you produce oats for sale for a living you already know this. If you purchase oats to feed livestock you may have noticed a dip in prices, but perhaps not 10+ % worth. Markets seem to work that way; a steep drop in production costs never seems to be fully reflected in the final prices that the end consumer pays.

The currency of Great Britain is called the pound. The pound had an awful year. Brexit happened and the UK wants out of the European Union. This is very complicated situation but the vote caused an immediate commotion in the fiat currency world and both the British pound and the euro currency were hit hard.

Quite honestly, the numbers I see reported regarding the 2016 performance of the pound vary greatly and I will let you decide how you want to interpret them. Of the seven major currencies in the world, the pound performed the worse by far in 2016, that much is certain. 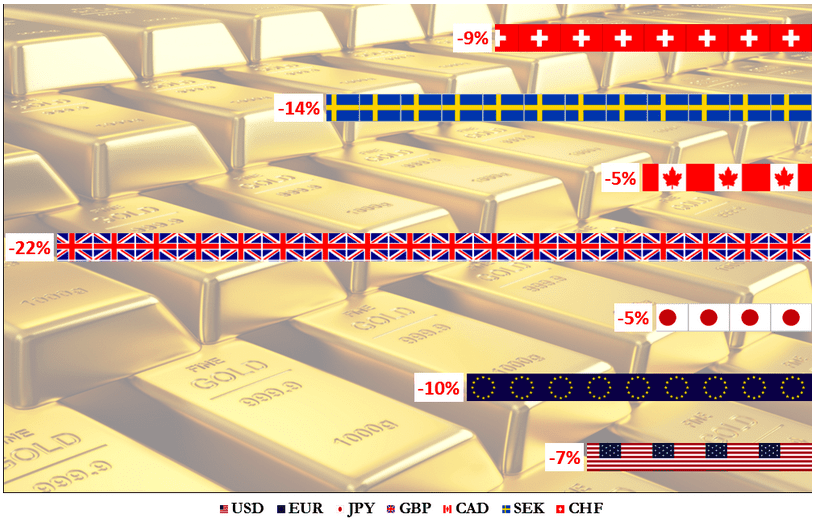 The VIX is a bit of an enigma. VIX is an acronym for the Volatility Index. Basically, the VIX is calculated by the Chicago Board Options Exchange or CBOE. You can look up the VIX on the S&P Stock Exchange and purchase shares. The more volatile the S&P 500 is the higher the VIX will rise. Perhaps unfortunately for VIX holders last year was kind and rather stress-free for the markets. The VIX fell 18.49% in 2016.

Wheat falls into the same category as oats and orange juice. These items trade on the markets and you can buy them to invest in them but you can’t really buy and hold orange juice or oats or wheat in your safe as an investment. Likewise, unless you are in the agricultural field, you probably don’t buy wheat in bulk.

Where you do purchase and pay for wheat is at grocery stores and restaurants. Food prices rose in 2016 and they seem to rise every year. Perhaps the overall rise in food prices during 2016 would have been even more noticeable if oats and wheat prices had risen rather than fallen.

Perhaps of most important note here is not that the drop in rice prices really helped at the grocery store, but that the huge drop in rice prices really hurt countries that export rice. The top six countries that produce rice for export may surprise you. They are from #1 to #6 as follows: India, Thailand, The United States, Pakistan, Vietnam, and Italy. The US produced and exported more than $2 billion worth of rice in 2015.

Did you see the price of chocolate bars drop? Me neither. But, cocoa came in as the biggest loser in 2016 as prices collapsed more than 31%. Much like rough rice, the countries that produce cocoa for export had it rough this year, pun intended.

The countries that produce the most cocoa for export are The Ivory Coast, Ghana, Indonesia, Nigeria, and Cameroon. None of these countries are overly wealthy and having a main export price drop by more than 30% has to hurt.

Gold and silver both finished winners in 2016. Gold was up more than 7% while silver prices were up more than 13% by the end of the year. And, unlike oats, wheat, and cocoa, gold and silver are currencies as well as commodities. Talk to an ITM Trading representative today about diversifying into physical precious metals.