Before we get started, however, here are a couple of definitions that will help you understand the subject more readily:

Fiat Money: Fiat money is currency that a government has declared to be legal tender, but it is not backed by a physical commodity. The value of fiat money is derived from the relationship between supply and demand rather than the value of the material that the money is made of.

Hyperinflation: In economics, hyperinflation occurs when a country experiences very high and usually accelerating rates of inflation, rapidly eroding the real value of the local currency, and causing the population to minimize their holdings of local money.

Lynette offers perhaps a more concise and chilling definition of hyperinflation. She states that hyperinflation is always the end result of unbridled money printing. During times of hyperinflation, some will suffer and some will thrive. Lynette’s mission in this webinar is to show you that having physical gold and a sound strategy in place when hyperinflation hits will position you to be one of the few who thrives.

Lynette States That There Are Over 4800 Fiat Currencies That No Longer Exist.

Global central bankers are pushing markets and creating policies that are taking us into uncharted financial waters. These actions, according to Lynette, will cause deep economic problems on a scale that has never been seen before. Fiat currencies will react and fail. Especially at risk is The United States dollar. The dollar is currently the world reserve currency, but that can and will end.

To illustrate her point Lynette offers a very telling graph. She explains that the transition of the US dollar from gold backed to completely fiat took several decades, but it is quite visible. An alarming trend is very noticeable beginning around the September 11th attacks in 2001. 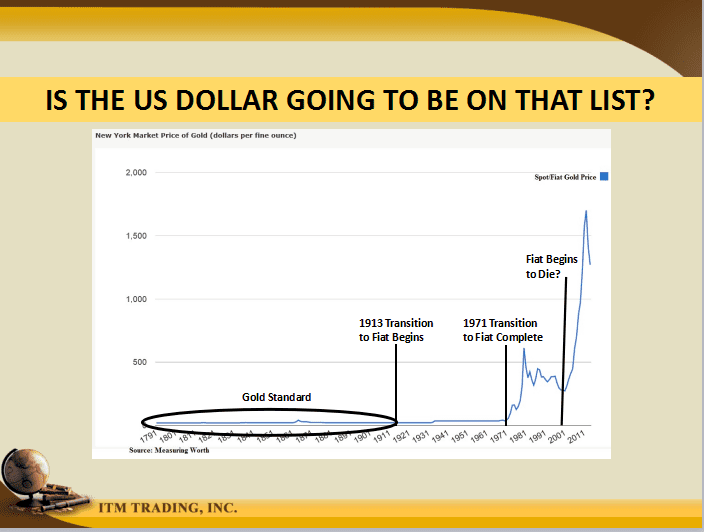 Lynette takes this opportunity to state that since we know how this cycle works historically, being at the right place at the right time with the right asset is a sound strategy.

What Is Hyperinflation Like ? It Can Look Good On Paper.

This stock market chart looks pretty impressive. Maybe you might want to put some wealth into this market. Today, US stock markets are hitting new highs, aren’t they? 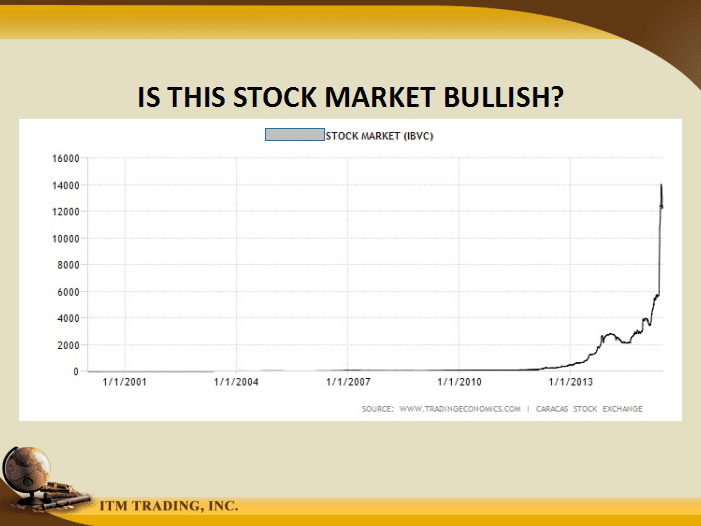 GDP or Gross Domestic Product is all the money that flows through an economy. According to this chart, which represents the GDP of the same country as the stock market chart above, things should be pretty good. 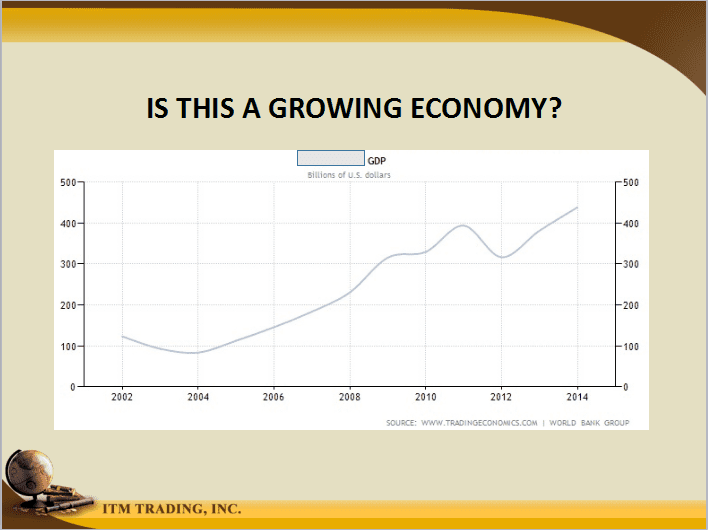 Since the economy is growing so robustly, there must be plenty of jobs, Lynette posits, so let’s take a look at those numbers: 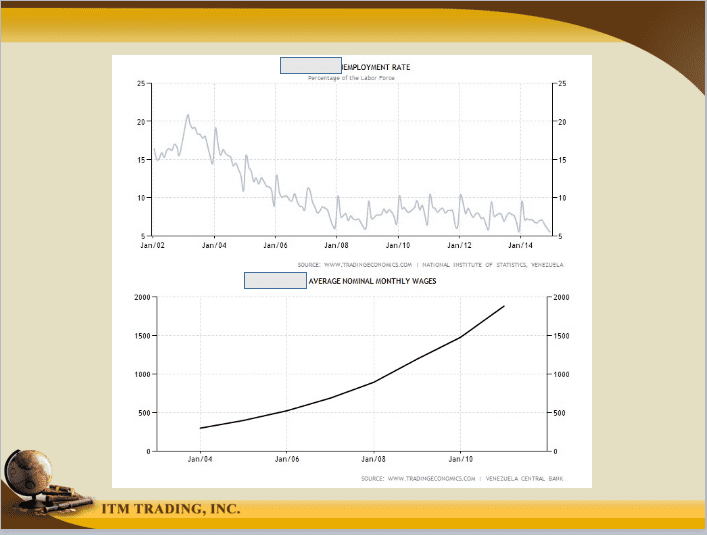 Unemployment has fallen from over 20% to 5.5%. Wages are increasing rapidly, too. That has to be good, right? Everyone would want their wages to quadruple, right? What could be driving this amazing and robust economic growth? 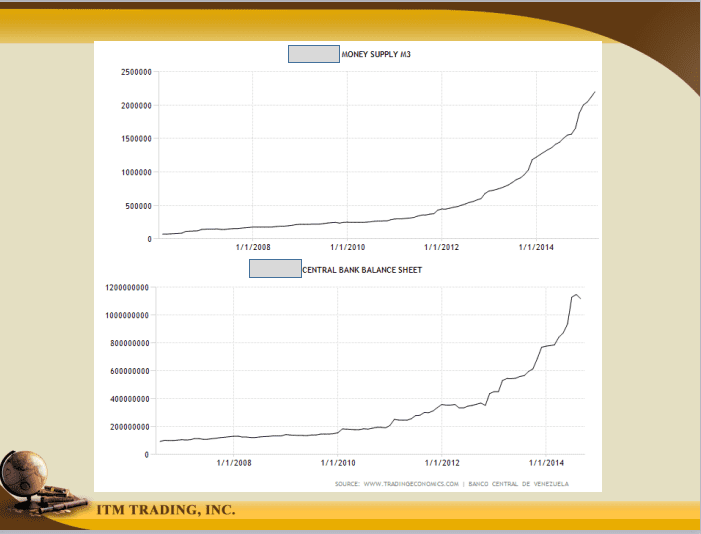 These graphs are indicative of central bankers trying to boost their balance sheets with inflation, according to Lynette. So, what is the inflation rate of this country? Let’s take a look at that graph. 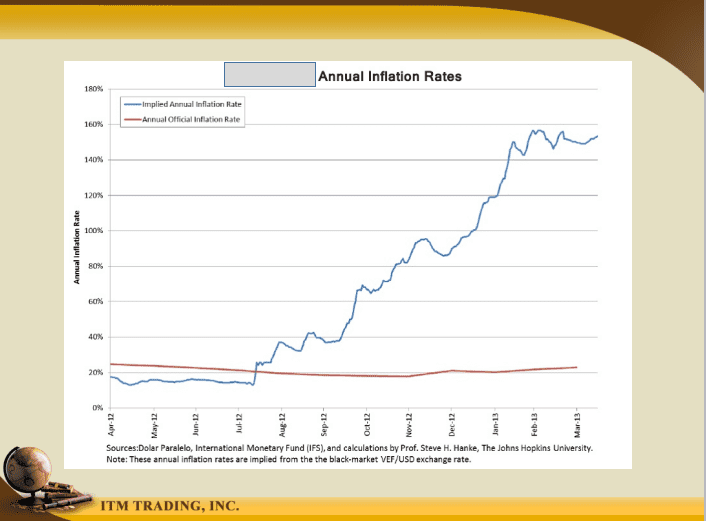 The graph above shows annual inflation rates closer to 160%, which Lynette introduces as hyperinflation. She also reveals that the previous charts and graphs were representative of Venezuela.

What Is Hyperinflation Like ? Protect Your Wealth With Physical Gold.

On the other side of runaway inflation, or hyperinflation is a corresponding rise in gold prices. What was the correlation between the Venezuelan bolivar and an ounce of gold, you may ask? Lynette offers the following graphic in her webinar. 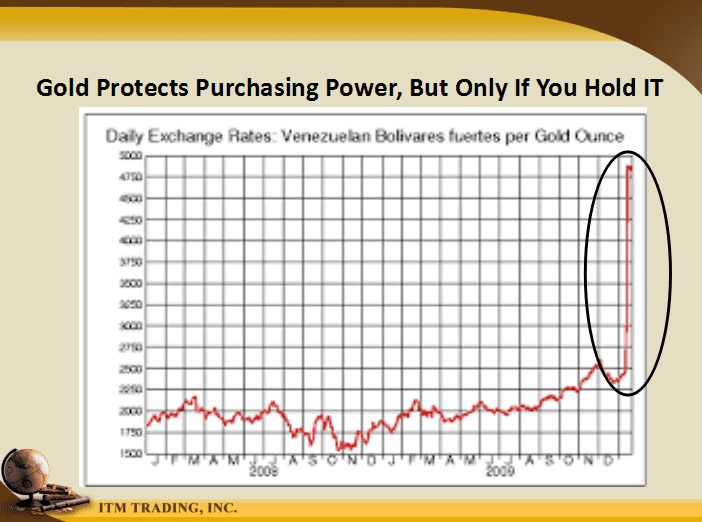 In order to bring the experience of hyperinflation to a more personal level, Lynette offers some quotes and real-life experiences surrounding hyperinflation, as well as some of her own insights in the next part of her webinar. 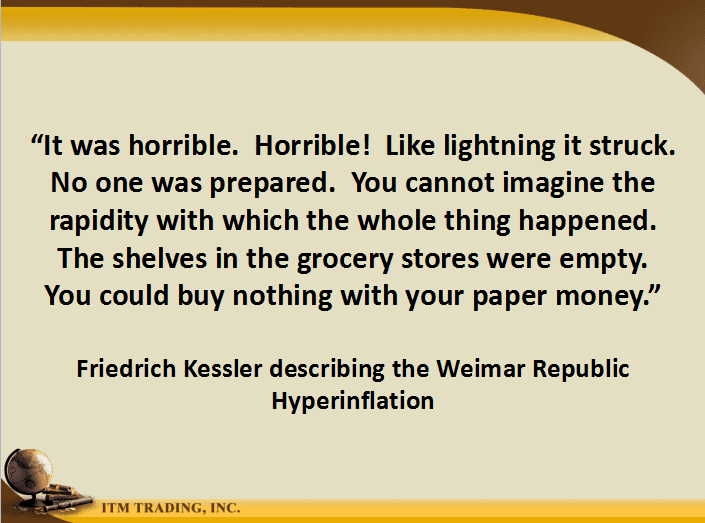 According to Lynette, the middle class is often hardest hit in times of hyperinflation because they feel comfortable in the fiat money system and they think that it could never happen here. But it can happen here. The next graphic shows the highest monthly inflation rates in recorded history. Can you imagine prices doubling in just fifteen hours? It has happened. 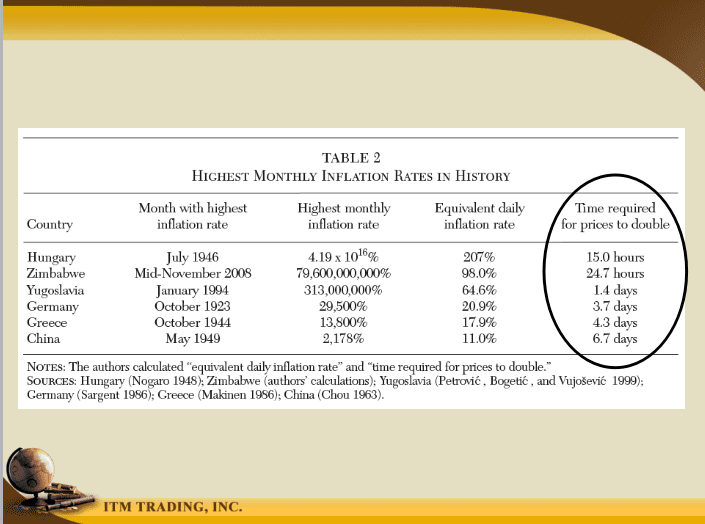 The Longer You Hold Fiat Money The Less It Will Buy You.

What Is Hyperinflation Like ? Fixed Wages. No Jobs. No Groceries. Runaway Prices.

Lynette offers more selected quotes of personal experiences of hyperinflation. Lawmakers passed laws decreeing that salaries must be raised in proportion to rising inflation, but this never worked for a variety of reasons. Unemployment explodes as economies contract. Savings become worthless.

In Bulgaria, hyperinflation happened quickly in the very late 80’s. A Bulgarian recounts his trials with hyperinflation during the time he was fifteen. His parents would give him 200 Bulgarian levs with which to purchase a small meal at school. But, by lunchtime, the cost had increased to 300 levs. The next day he would ask his parents for 300 levs for a meal, but again, by lunchtime, the price had increased to 400 levs. The inflation did not only apply to the student’s snack, but the same price increases were happening throughout the entire market. 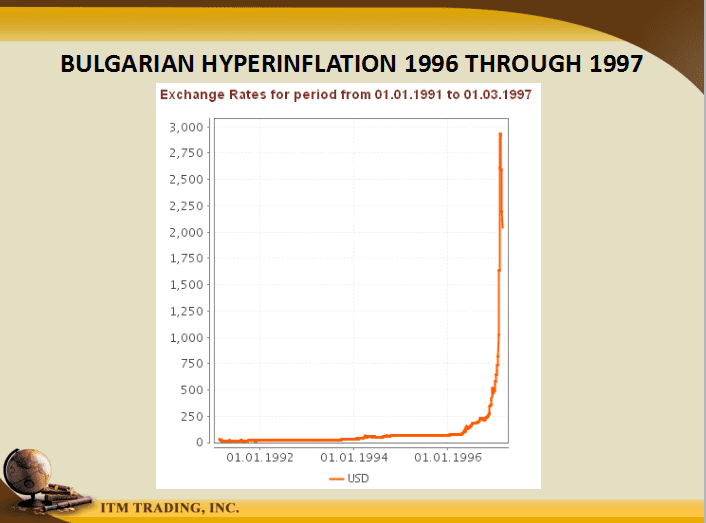 More recently, Zimbabwe went through hyperinflation. Here are some examples of Zimbabwe hyperinflation Lynette included in the next segment of her webinar.

Hyperinflation in Zimbabwe meant paying $100 Billion for three eggs or owing the phone company well over $2 trillion for your latest monthly bill. If you were fortunate enough to be able to afford a beer in Zimbabwe, you always bought two at a time because the price of the second beer would double while you were drinking the first.

The economy and society begin to break down. There is no money to pay teachers. Those that would teach for free don’t have bus fare money to travel back and forth to school. The hospital shelves are empty of supplies, and even the hospitals are short of water for washing and bathing. What water there is, is infected with cholera.

The government’s solution to hyperinflation, generally, is to just lop off the extra zeros on the currency and pretend things are fine. 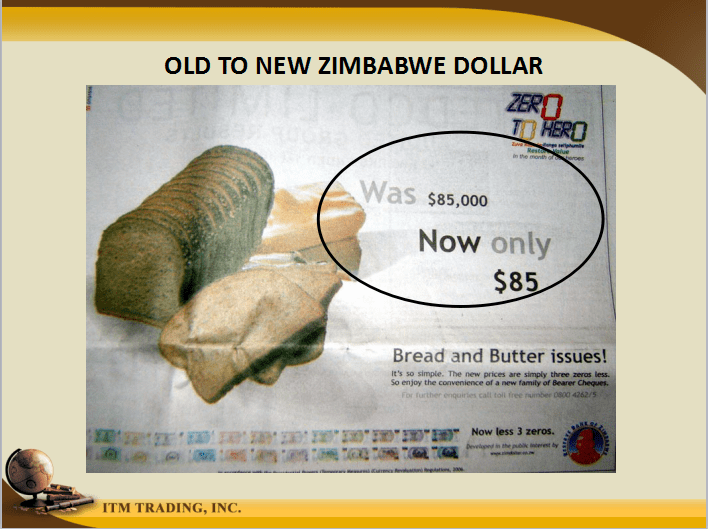 In Brazil, similar hyperinflation stories unfolded. Lynette offered hyperinflation experiences specific to Brazil, in her webinar as well. One Brazilian recounts living through five or six different currencies. Television and radio commercials would announce the new currency and it’s name. An old $100,000 note would become a new $100 note.

In Zimbabwe, notes were actually printed with expiration dates, so you had to spend them. Even if you tried to save, your efforts would be fruitless. Hyperinflation hurts the poor, the working, and particularly those on a fixed income. In Zimbabwe, you could be a trillionaire and still starve.

What Is Hyperinflation? It’s Not How Many Dollars You Have.

Lynette asks the question, “Are you starting to see that it’s not how many dollars you have that is important, it’s what you can convert them into…a loaf of bread or a tank of gas.” Physical gold has intrinsic value, but fiat money has no value until you convert it into a good or service.

What Is Hyperinflation Like ? Nutrition And Health Care Are Scarce. 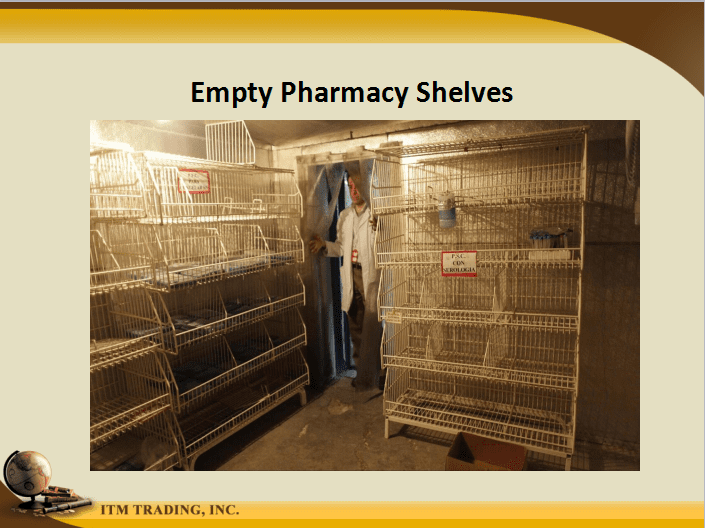 Perhaps exacerbating this condition would be a bank holiday. A bank holiday is a kind way of saying banks close their doors and their systems and deny depositors access to their money. Not only do banking holidays completely disrupt commerce on both the retail and wholesale levels, they generally cost depositors purchasing power, as well.

As a direct response to government price controls and market manipulations, black markets spring up. These markets fill the needs of those with barterable wealth. 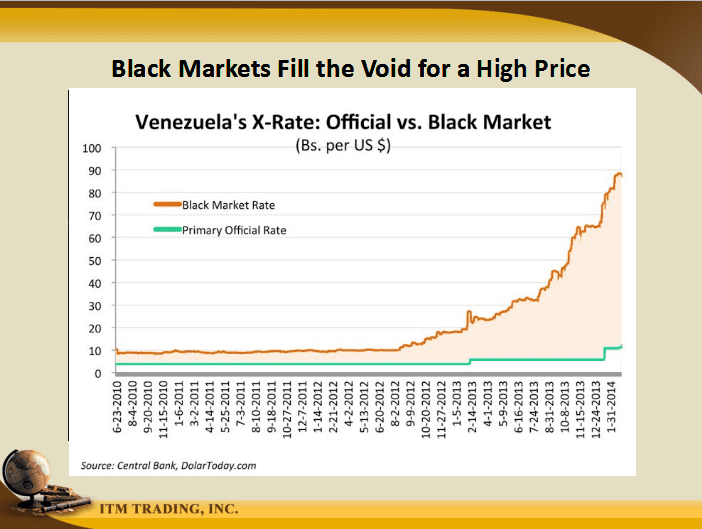 How can you prepare for hyperinflation? Take some cash out of the bank. Hold some physical gold and silver coins and bars. Keep some basic medical supplies on hand. Know how to use them. Any plans should be customized to the individual.

There are two types of debt, Lynette explains in this part of the seminar. There is fixed debt, and there is variable debt. They behave in different manners during times of hyperinflation. Variable rate debt is the most dangerous type of debt obligation because it resets frequently.

As an example, Lynette cites a story about a Brazilian person who financed a winter coat out of necessity on a credit card that had a variable rate during a time of hyperinflation. The coat took six months to pay off and ended up costing more than six times the financed price after interest.

Lynette suggests either paying off variable rate debt or at least converting that debt to fixed rate debt. But even fixed rate debt has it’s caveats. In another Brazilian example, Lynette recounts how Brazilian mortgages were tied to the national interest rate, and they would reset annually, almost like a lease. After years and years of paying increasing mortgage payments, the mortgage holders would owe more on their mortgages than they initially borrowed. 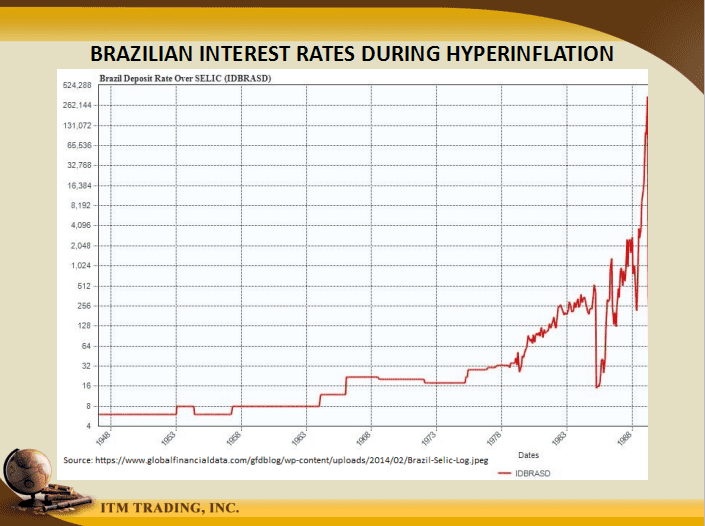 Here Lynette mentions Basel III which is a global regulatory banking framework. Basel III is cited as the authority which gives banks the right to basically change mortgage contracts according to currency devaluations or hyperinflation. The banks don’t lose during hyperinflation, the customers do.

In addition to mortgages becoming tougher to pay as balances and payments increase, property taxes tend to spike as well because governments generate income via taxation. Many lose their homes as debt becomes impossible to service.

What Is Hyperinflation Like ? Own Gold. ITM Trading Has A Strategy.

The goal of this strategy is to put you and your family in the best possible position during and after the reset. Have cash available outside of the banking system, it will be useful at first. Hold the cash with your physical barterable gold and silver. 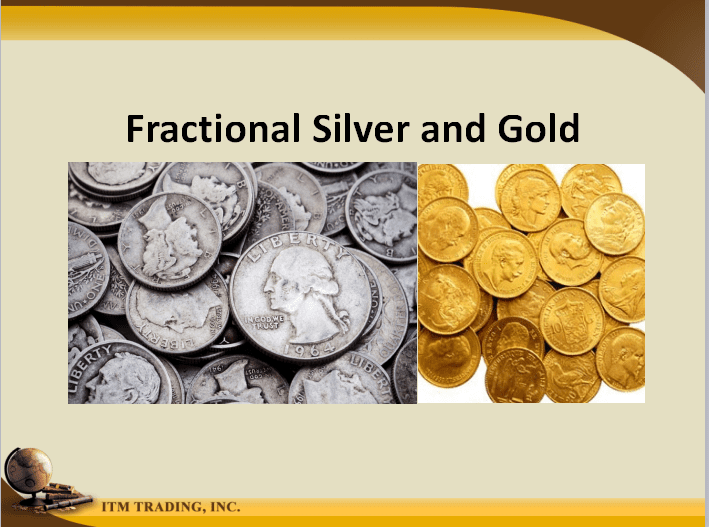 Weighting your portfolio with different types of gold coins and silver coins and bars will help you achieve certain goals. Contact your ITM Trading representative to develop a strategy and a portfolio that will help you meet your specific goals.

In conclusion, Lynette finishes her webinar by listing a few action items that will help you prepare for hyperinflation. She suggests tackling the area where you feel the most vulnerable, and then quickly moving to the next area of vulnerability, and so on. Below is her action items graphic. 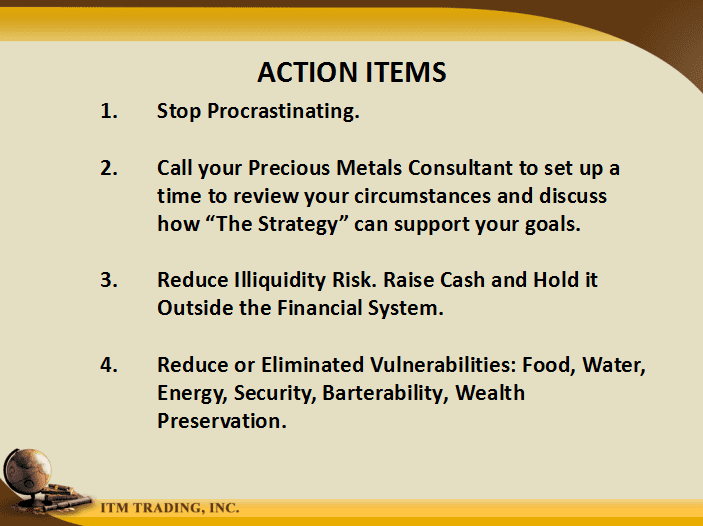 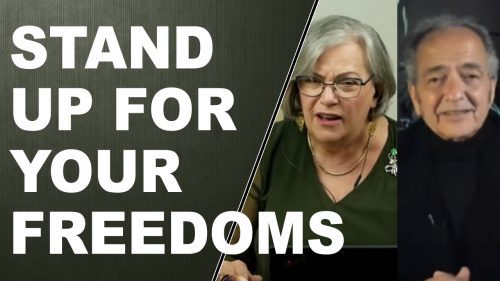 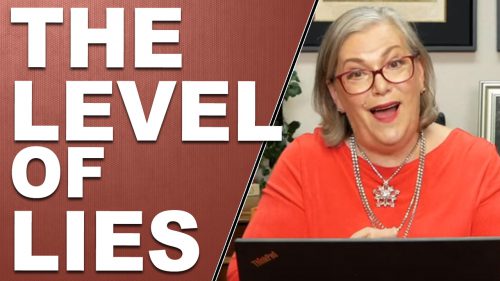