Venezuela and it’s currency, the bolivar, have been in trouble for quite some time now. ITM Trading’s chief market analyst Lynette Zang covered hyperinflation and Venezuela in a webinar available here. I have previously written a couple of short articles available here and here that will quickly explain why Venezuela is in the state of currency collapse that it currently is. There is a whole world besides Venezuela, however, so it had been a little while since I checked up on the situations down there. When I looked for some information in order to write a Venezuelan crisis update the following were the first few Google results. They are not encouraging. 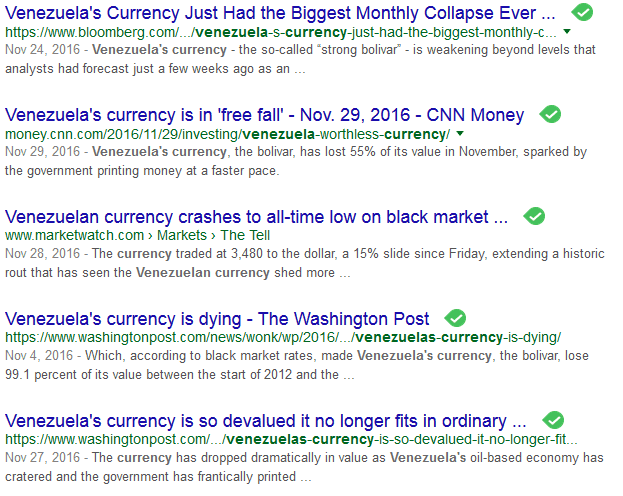 We have a wide range of Gold products including bars, rare and bullion coins

When a country’s currency is in trouble, the country itself can be threatened. In the unfortunate Venezuelan situation, there are multiple threats. In danger are the people of Venezuela, the currency stability of Venezuela, and the legitimate markets of Venezuela. Following are some quick highlights and a summary of information contained in the articles above, and then some.

The above quote doesn’t make much sense to most of us as Americans. Let me add a little perspective. According to the Washington Post article which the above quote is from, cash is a big problem, literally. The largest Venezuelan bill in circulation is now worth less than a nickel. Withdrawing the value of $5 US for simple purchases means you will end up with more than 100 bills in your hand. The ATM’s can only hold a limited number of bills, so they are empty often. Some must be refilled every three hours.

The kiosk owner later states in the article that he will have to carry a home a large plastic bag full of cash. The day’s sales, which total about $52 US, is far too cumbersome to be carried discreetly or in pockets. A kiosk owner down the road reported being robbed at gunpoint for his sack of nearly worthless paper.

People like Gustavo Diaz pull back the curtain on government numerical manipulations and tomfoolery in Venezuela. There is an interesting website called ShadowStats.com that publishes interesting alternative unemployment statistics in the US. You may want to look into the real numbers behind the numbers in the United States economy before you finalize your investment decisions. You may not like what you find out.

The politicians in Venezuela would have the citizens believe that everything is okay, or at least getting better. These CNN Money quotes from front-line people in the financial and investment banking sectors would seem to say otherwise.

ITM Trading’s Online Store Have Gold and Silver Shipped To Your Home!

When the government won’t recognize that there are significant currency and market problems, that does not mean the problems simply go away. Government mandated price controls lead only to bare shelves, theft, and corruption. Government published exchange rates may make the currency look good on paper, but what happens in the streets tells the real story. Venezuela has a huge black market.

A black market may help feed and supply citizens at the moment, but black markets are not conducive to fair pricing and market stability. The black market is, however, a perfect tool for gauging the true decline of the Venezuelan currency.

Venezuela has two different official currency exchange rates, depending on import and export status and other qualifiers. Depending on who you are and what you are commerce is, you may be able to exchange either 10 bolivars or 610 bolivars for a single US dollar through the Venezuelan government. There is quite a disparity between the two rates. If you don’t qualify to exchange through the government (few do) your exchange rate at the time of the publishing of this graph was 2,753 bolivars to one dollar and climbing very very quickly.

Everyone in Venezuela needs physical gold and silver to protect their wealth. The bolivar is perhaps one step away from being currency dust. All fiat currencies eventually become currency dust. The US dollar will be no different. In fact, the IMF (International Monetary Fund) has already announced the SDR currency (Special Drawing Right) as the US dollar’s replacement as the world’s reserve currency.

So, if you think that what is happening to the Venezuelan currency cannot happen to the US dollar, you are wrong. Those plans are already past the drawing board stage. They are now in the implementation stage. Watch this special ITM Trading report on the subject and judge for yourself. Add gold and silver to your financial portfolio while it is still easy and affordable here in the United States. Call an ITM Trading senior analyst today to begin the discussion.