Perhaps you had a grandparent that used to give you silver dollars at Christmas time or for your birthday. Maybe you used to get a silver dollar every now and again from the Tooth Fairy. If you are old enough (born before roughly 1960) then you would remember that all of the dimes or quarters or fifty-cent pieces you received for baby teeth were made of silver. Giving silver holiday coins and bars is a tradition for some people already.

This Silver Bar Was Produced The Franklin Mint.

We carry a huge amount of silver coins and bars. Shop online here

This Silver Bar Was Produced By SilverTowne.

Let’s face it, most gifts are disposable. Clothes become outgrown and/or go out of fashion. Toys break or fail to hold the interest and attention of a young child. Eventually, all the toys fade to just memories. Even bicycles and electronics age out of usefulness.

A keen understanding of money, currencies, inflation and appreciation are lessons that every child should learn before they are faced with making their own long-term financial decisions. In a way, giving silver holiday coins and bars is the perfect opportunity to revisit with a loved one the value of saving for the future. Providing them with silver as a store of value shows them the way to accumulate wealth outside of the unstable dollar and banking systems. Silver can be the gift that “keeps on giving”.

As you probably already know, the 25th wedding anniversary is known as the “Silver Anniversary”. For quite a while giving a couple who reaches this marriage milestone silver has been a norm. Although, these days, candlesticks and serving platters seem to be a bit less relevant than they used to be.

A quick story. Several years ago my wife and I were invited to attend the wedding of a past co-worker of mine. She was easily one of the brightest sales/finance managers I had ever met. She knew her numbers. She was marrying an aeronautical engineer. He must understand numbers, too. 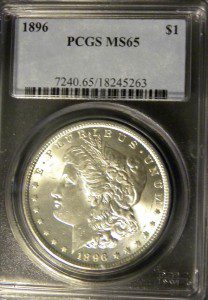 We figured that since they had both been married before and had successful careers and were both in their forties, that they probably had all of the material possessions they really needed. Rather than a gift certificate or fancy coffee maker, we chose to give them two graded silver dollars. The coins were not rare dates, but they were in a very high Mint State and they were graded and encapsulated by PCGS (Professional Coin Grading Services).

A couple of weeks later, my wife and I received a very nice thank-you note from the couple. They really appreciated “The beautiful antique silver coins”. We were happy they did. Roughly three years later I sent them a little anniversary note. Tucked into the note was a little portfolio review that showed the increase in the value of the two coins during the past three years. They had nearly doubled in price.

Perhaps two or three weeks later my cell phone rang. It was Jodie’s engineer husband. We didn’t know each other very well being that I had worked with his wife but had seldom ever spoken to him. He had all kinds of questions. But, being that he had a very mathematical mind, he grasped devaluation, inflation, and currency concepts rather quickly. This man had learned quite a bit in his lifetime and studies, but no one had ever explained investing in a store of value to him.

Near the end of our conversation, he lamented that the two silver coins tucked away in their bureau had outperformed almost all of the complicated investments they paid handsomely to have fund managers watch. In essence, the silver coins were just a gateway to transfer the bigger gift: Knowledge.

Silver holiday coins and bars are struck to commemorate all types of holidays, religious or not. You can find one-ounce silver bars depicting everything from an Easter egg to the Crucifixion. Also, silver coins can be found with designs ranging from a groundhog to a turkey or even a certain snowman.

So, whoever you are trying to buy a silver holiday gift for, there is certain to be a silver coin or bar that will delight them. If you would like to surprise a loved one with a coin from a particular year call ITM Trading. We will do our best to help you find the perfect gifts for your friends and family.