Title: The Retirement Tsunami Has Begun

Description: There are 76.4 million baby boomers in the US. 10,000 of them turn 65 per day and most are fiscally unprepared for retirement in what is call a “Gap Trap”. Most will be dependent on pensions, IRA’s, 401K’s (and other private plans), social security and Medicare. What is the true condition of those retirement schemes? How is that likely to impact me?

Lynette Zang is the chief market analyst at ITM Trading. For some time now Lynette has been using social media to connect with her clients and followers. Following is a brief synopsis of a Facebook Live post in which we find Lynette Zang talking about insider trading, fiduciary responsibility, and problems in the retirement fund sector. Lynette made this presentation on April 11, 2017.

First of all, what is insider trading? Wikipedia defines insider trading as the trading of public company stock or other securities (such as bonds or stock options) by individuals with access to nonpublic information about the company. Trading by specific insiders, such as employees, is commonly permitted as long as it does not rely on material information, not in the public domain. Many jurisdictions require that such trading be reported so that the transactions can be monitored in the United States and several other jurisdictions trading conducted by corporate officers, key employees, directors, or significant shareholders must be reported to the regulator or publicly disclosed, usually within a few business days of the trade. In these cases, insiders in the United States are required to file a Form Four with the US Securities and Exchange Commission (SEC) while buying or selling shares of their own companies.

Now that we know what insider trading is, what does Lynette have to say about it? She starts by stating that insiders are definitely selling and they are not buying. Because certain key officers have to report their trades, as we learned above, Lynette can track them. The first graphic Lynette offers is a key statistic. If you take a broad overview look at what insiders are doing you will find that they are selling 203 shares in their companies for every one share that they purchase. The insiders know something, and they are definitely selling. They are not buying. 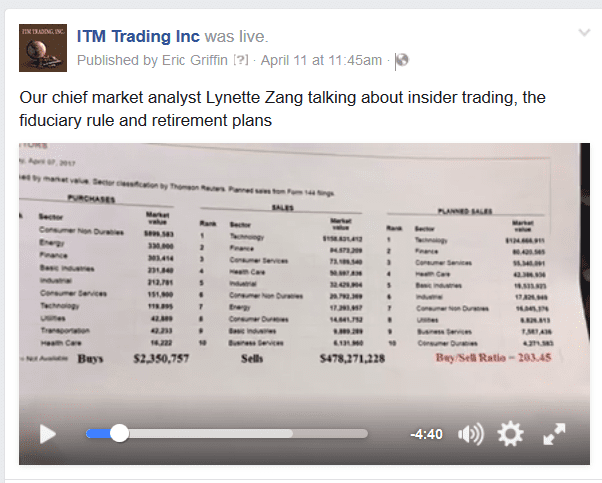 As a case in point Lynette offers up some Amazon data. The insiders at Amazon are definitely selling. Insiders at Amazon are not buying. In fact, over a three-month period, no insiders purchased Amazon stock. 25,000 shares, however, were liquidated by people who were required to file when they sold their stock. 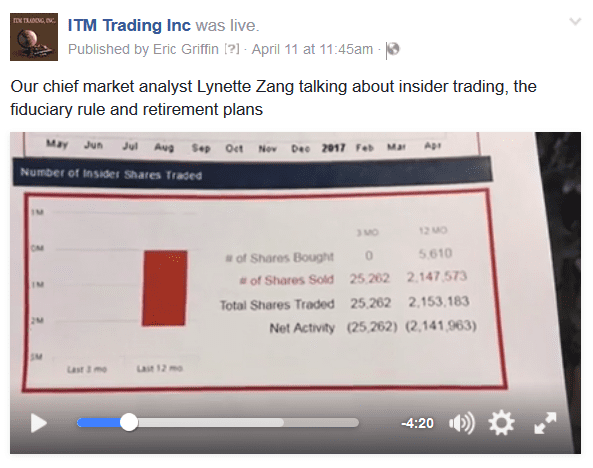 Over a 12 month period, only 5610 shares of Amazon stock was purchased by people required to file. But, over 2.1 million shares of Amazon stock were sold by people required to file. What is going on at Amazon? What do the insiders know that we don’t know? The stock price has definitely been increasing, as Lynette points out. She offers that these are the types of things that you need to know before you can make educated choices about investing. 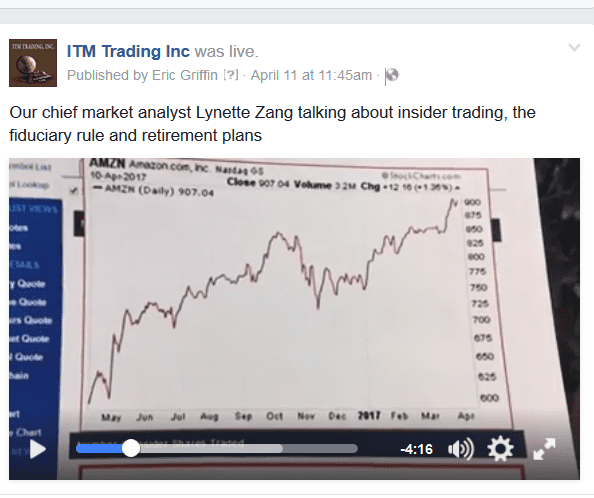 What is fiduciary duty? If we consult Wikipedia again we find that a fiduciary duty is the highest standard of care at either equity or law. A fiduciary is expected to be extremely loyal to the person to whom he owes the duty (the “principal”): such that there must be no conflict of duty between fiduciary and principle, and the fiduciary must not profit from his position as a fiduciary (unless the principal consents).

What this ultimately means is that the people you invest your money with are supposed to have your best interests in mind. Your profits should be more important than their charges and fees. There were changes scheduled to the fiduciary laws in the United States, but they have been pushed back until June. Apparently, big business is fighting against any changes that would benefit the investor. Meanwhile, they are announcing changes that are self-benefiting.

Lynette points out that FINRA, which is the self-regulatory body that oversees stocks and bond purchases etc., has some new ideas. Among these ideas, which will probably become reality, are some deal breakers in Lynette’s opinion. For instance, brokerage houses and other financial institutions want the right to withhold disbursements etc. if they feel that the financial transaction you are making is not in your best interest.

In addition, institutions are also feeling the need to have someone other than you to contact about making changes to your account. What they essentially want is the name of another party that can make decisions on your behalf. Does this seem reasonable to you? Do you need somebody else, or another financial entity making your decisions for you? 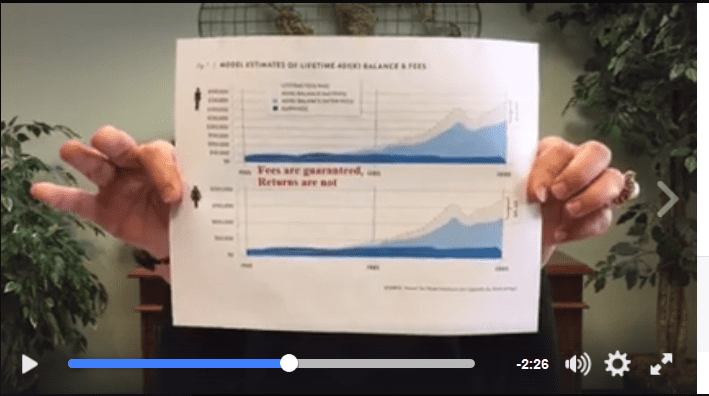 With what Lynette has presented, one must wonder if there is still a fiduciary duty in place. We know that there are still fees and costs in place for investing. In her presentation, Lynette shows a graph and it is obvious that the financial sector is well-paid. In fact, one area of the graph states that “Fees Are Guaranteed. Returns Are Not.” Ultimately, the financial system wants to keep your wealth inside of it and they want total control of it.

Lynette spends the final few moments of her five-minute Facebook presentation inviting you to her upcoming webinar. The topic is problematic retirement plans and how this a situation affects you. She tells us there are $75.5 trillion invested in these plans globally. The problems start to arise when you look at the layers and layers of leverage associated with these retirement plans. If you don’t understand what leverage is and what financial risks are associated with the market of this size then you really should watch her webinar. It is available by following this link. In conclusion, follow Lynette on Facebook and YouTube to find her latest updates.
Word count: 953