Many people think that the current fiat money regime can go on forever and point to Japan as a prime example. Afterall, their economy collapsed in the early 1990’s after decades of rapid economic growth. In 1992 the BOJ began a, so far, never ending series of “extraordinary policy” as they experimented with, and expanded the central bank took box.

Before the crisis, global central bankers were fast to point out the problems with their experimental policies, showing how illusive 2% inflation growth was. Today, Japan has become the monetary trendsetter leading the way to the next level experiment that expands central bank and government use of tools as described in MMT (Modern Money Theory).

Key is that central banks can directly fund government spending (which they’ve all been doing since 2008) WITHOUT additional tax revenues. Sounds like Utopia. Of course, Utopia does not exist.

Gone are the days of austerity. Doesn’t everyone know that you can build wealth on unlimited amount of new, free fiat money? Can’t we all see that all this new debt now has NOT created the dreaded hyperinflation feared? Rather, the markets have gone up showing how well QE has worked, never mind that central banks and corporations has use “financial engineering” to provide this appearance.

In fact, the Federal Reserve Bank of New York hired Columbia SIPA, School of International and Public Affairs to conduct a study on the Bank of Japan’s efforts to see if this could be a tool for global central banks.

The BOJ has used ZIRP (Zero Interest Rate Policy) since the late 90’s and QE since 2001. When that didn’t work they went to QQE (Qualitative AND Quantitative Easing), which is QE on steroids in 2013. That didn’t work, so in 2015 they took more direct control on JGB short and long term interest rates calling the new policy YCC (Yield Curve Control) and for an added bonus in “stimulation”, threw in NEGATIVE interest rates, also known as NIRP (Negative Interest Rate Policy) in 2016.

Results from this 2018 report are as follows:

The government and central banks count on banks to take in funds and distribute those funds into a growing economy. On May 15, 2019 Reuters reports that “Profits fall at Japan’s top three banks as economy slows” and from the Columbia report, an average of 60% of regional banks and financial institutions that serve small and medium enterprises and local residents, fail to cover operation expenses with lending and fee revenues.

Showing that these money printing operations have UNDERMINED FINANCIAL STABILITY

ZIRP and NIRP have forced institution investors toward riskier stocks and overseas assets. Overseas financial assets run foreign exchange, market and rate risk. It also aggravated a currency mismatch between fiat money assets and their liabilities that are owed in Yen.

If the Yen is weaker against the fiat asset currency when the institutional investor needs to sell, large losses would be incurred.

Section 2.2.4.3 Weakened functioning of financial intermediaries at the “reversal rate”

Changes in short to medium term interest rates typically have the largest economic impact because most corporate and household financing is based on these rates. Longer-term rates support financial infrastructure like insurance and pensions.

ZIRP, NIRP AND YCC flatten or even invert the yield curve and kill bank profits. This inhibits banks ability to act as a financial intermediary in a phenomenon know as the “reversal rate”.

The above institutional investors referenced in 2.2.4.2 invest OPM (Other Peoples Money). In fact, Japan has the world’s second largest life insurance with financial assets of approximately 75% of Japan’s GDP. With the fastest aging population in the world, pension funds and life insurance companies are of significant importance.

These policies are based upon the “CLAIMS PAYING ABILITY OF THE COMPANY”. What do you think will happen when the first pension fund or life insurance company does not pay out?

Showing that these money printing operations THREATEN PUBLIC CONFIDENCE IN ESTABLISHED INSTITUTIONS and THREATENS CENTRAL BANK ABILITY TO COVER UP A FINANCIAL CRISIS.

On October 1, 2019 Japan will raise the sales tax from 8% to 10%. The BOJ estimates that the tax increase will cost households 5.6 trillion Yen and collapse consumer spending. Will this be the straw that breaks Japan’s back and drives them into the full MMT experiment?

Their opinion is based upon their 2014 experience, when they raised the rates the last time. So to counter this, they are “stimulating” the economy with 2 trillion in deficit spending. Do you think the public will see through this?

Interestingly, in the report authorized and paid for by the New York Federal Reserve, they conclude Japan’s extreme monetary experiment a success! Welcome to CENTRAL BANK TOTAL CONTROL REGIME.

Perhaps these are “The factors that drove central bank net purchases to a 50-year high in 2018” and had a growing breadth of central bankers continuing this trend. 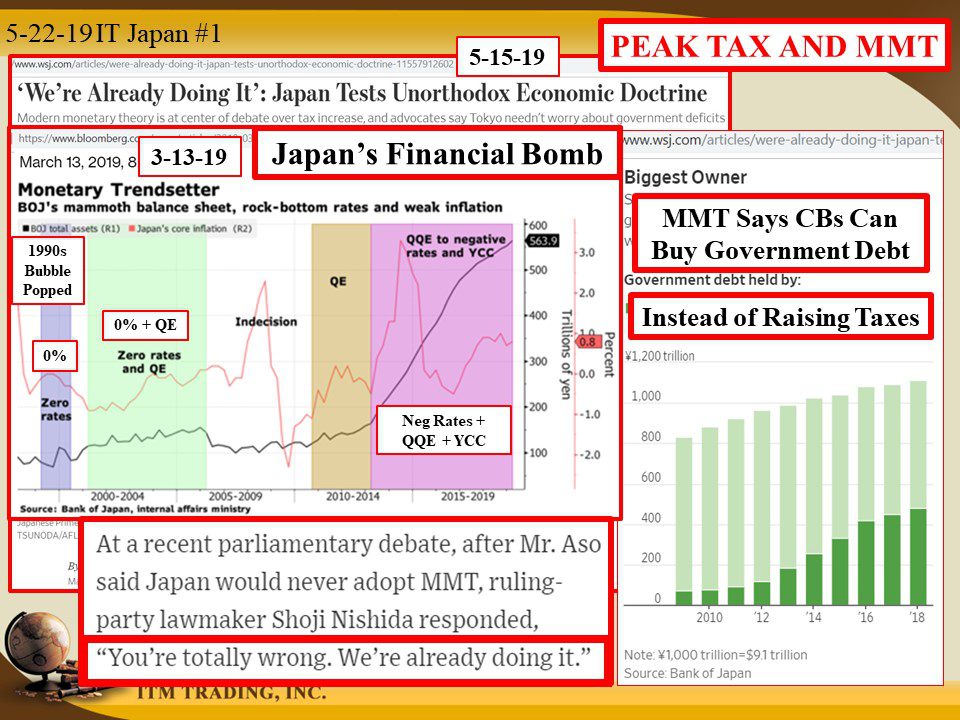 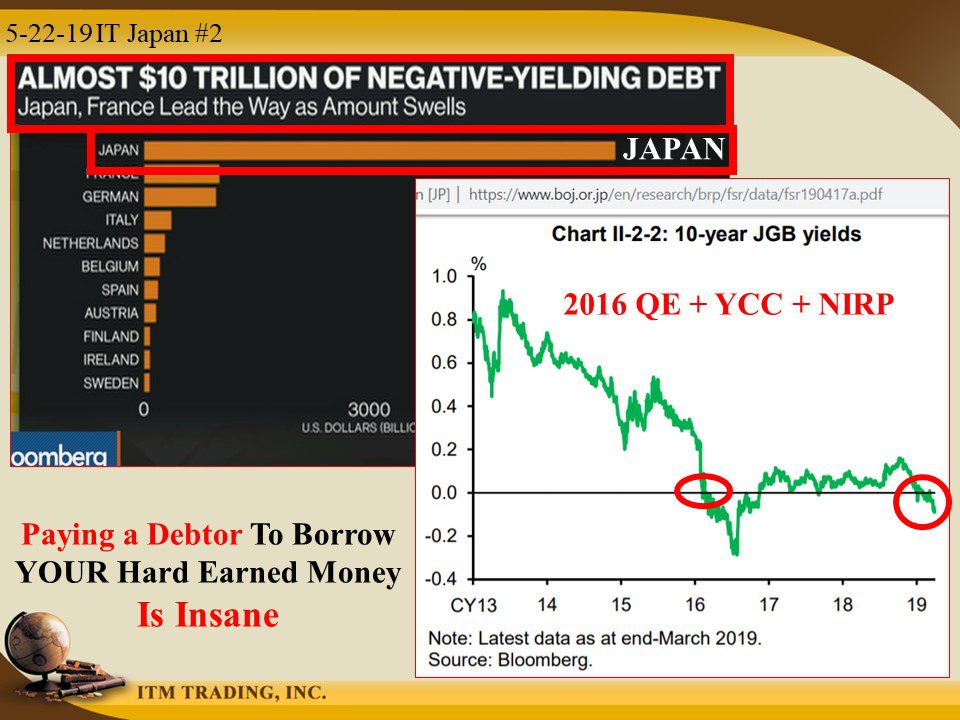 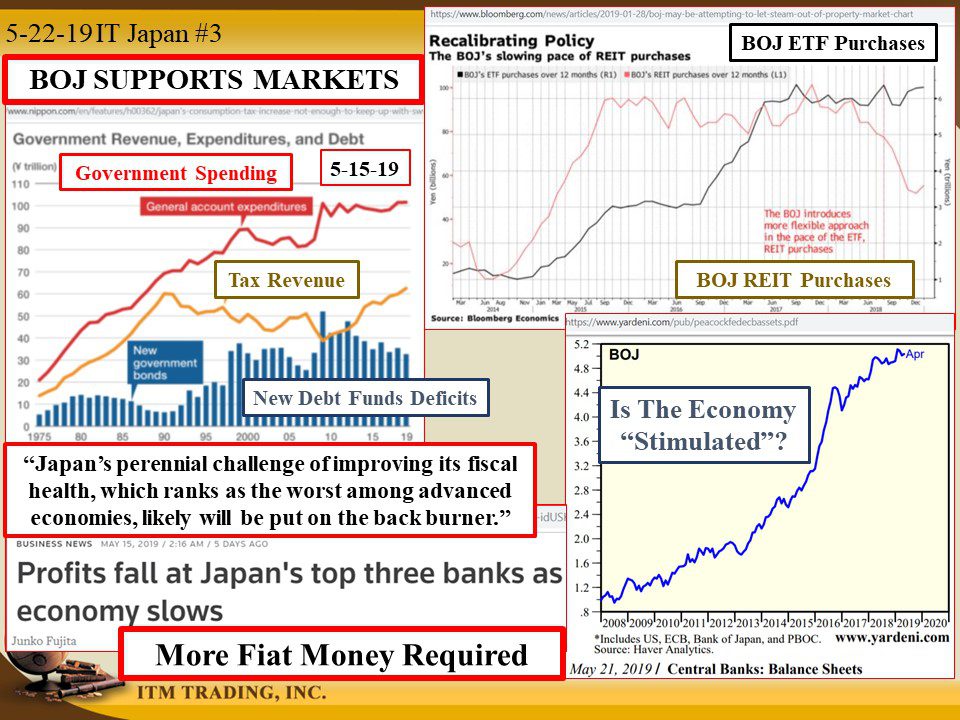 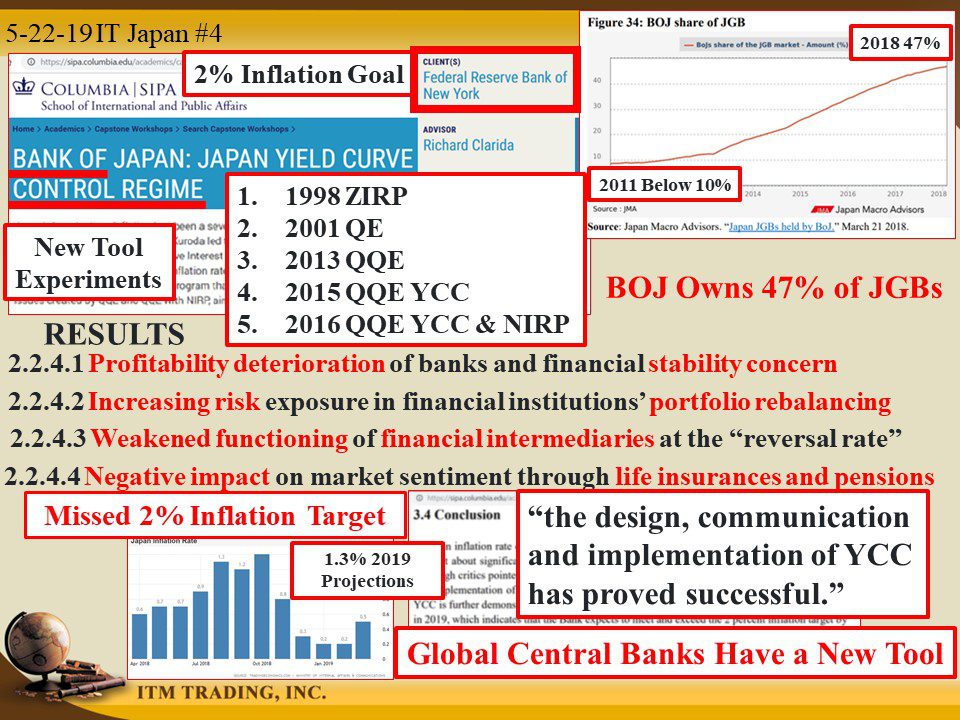 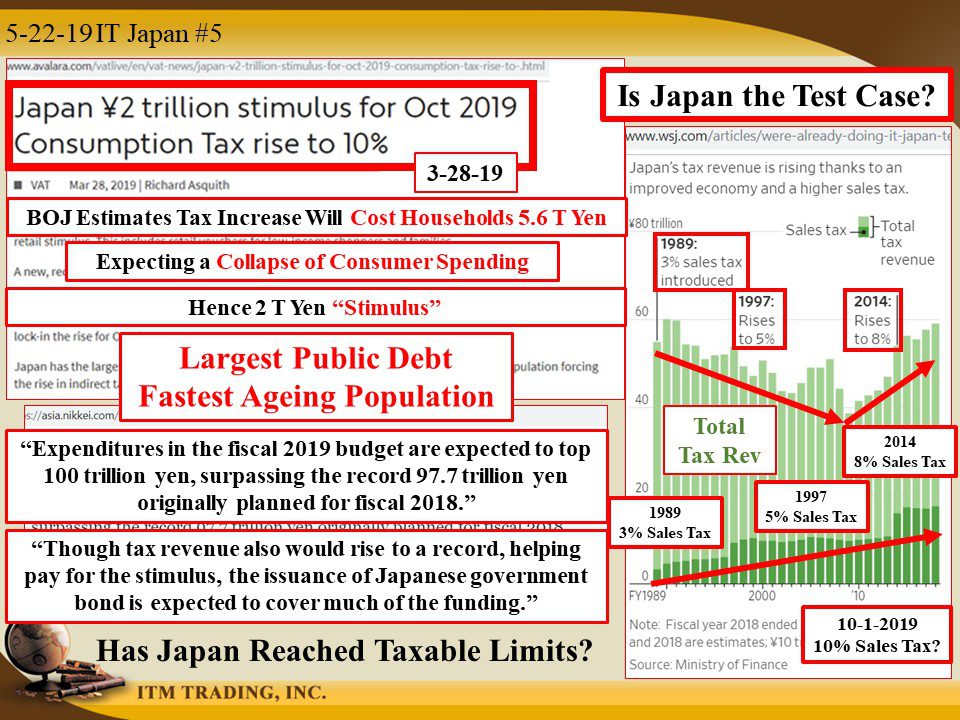 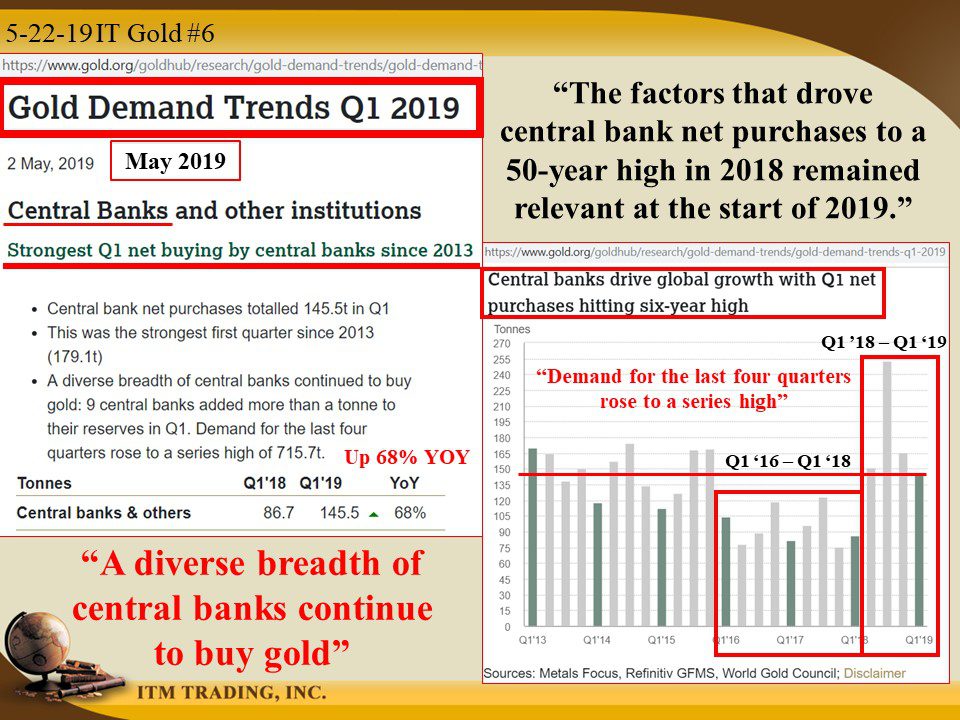 Many people think that the current fiat money regime can go on forever and point to Japan as a prime example. Afterall, their economy collapsed in the early 1990’s after decades of rapid economic growth. In 1992 the BOJ began a never ending series of “extraordinary policy” as they experimented with, and expanded the central bank took box.

Today, the global central banks look to Japan as a monetary trendsetter.

On October 1, 2019 Japan will raise the sales tax from 8% to 10%. The BOJ estimates that the tax increase will cost households 5.6 trillion Yen and collapse consumer spending. Will this be the straw that breaks Japan’s back and drives them into the full MMT experiment?

Who knows more about the financial system threats than those that create and manage it? Q1 2019 kicked off what will likely be a banner year for central bank gold purchases, which are up 68% YOY as a “diverse breadth of central banks continue to buy gold”. Think they know something you don’t? 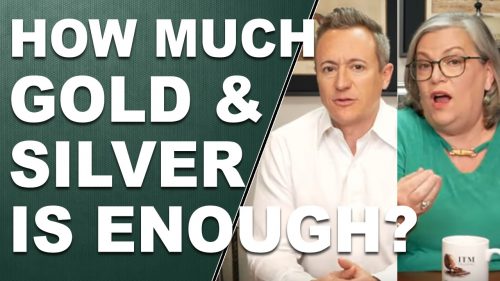 HOW MUCH GOLD AND SILVER IS ENOUGH IN RESET... Q&A with Lynette Zang and Eric Griffin 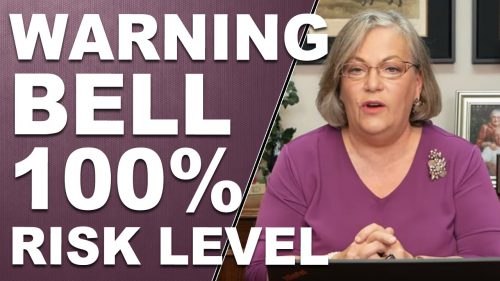