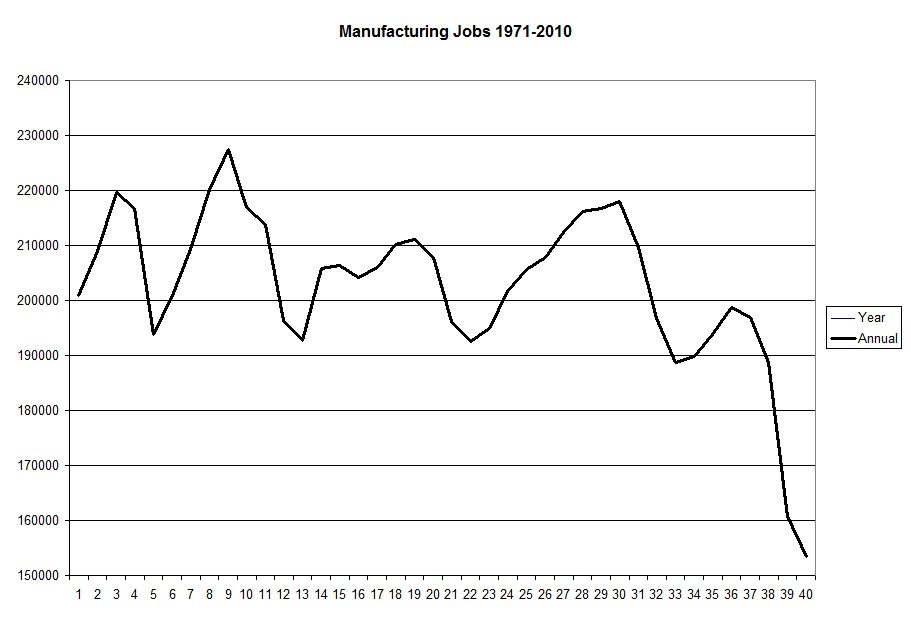 The jobs report came out this morning at 1/3 of what the economists were expecting, 54,000 jobs and reportedly 9.1% unemployment. What a surprise! Why won’t the private sector create new jobs? Profits are up, the stock market is up, the dollar is down and all is right in this recovery, even if it is a slow recovery.

But while the private sector is shrinking, the government sector is growing. 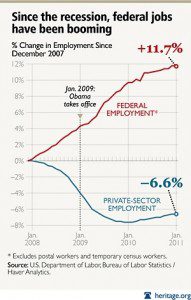 The problem with that is the resources spent by the federal government do not come out of thin air, but rather directly from the private sector. Governmental hiring is more about political agenda than creating sustained private sector job growth and even a growing tax revenue base. In the 1980’s, when we decided that “globalization” in business, trade and industry was the way to go we began the shift that we are paying for today, converting the US from a manufacturing economy to a consumer driven economy. Today, 70% of our GDP is from consumer spending.

Over the last 41 years we have consistently sent manufacturing jobs overseas, so most of what we have left, in terms of employment opportunities, are in services and government. 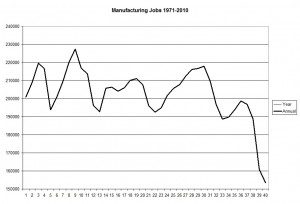 On January 19,2011 President Obama met with Chinese President Hu Jintao and industry leaders, including Boeing to see what could be done to create more jobs in the US*. On that same day Boeing was awarded a contract worth 19 billion*. Awesome, lots of jobs for the US! But wait, on January 21, 2011 Boeing cut 1,100 US jobs*. On January 28, 2011 Boeing cut US 10,000 jobs*. They cite a slowdown in business, hmmm, but wait, what are they doing in China? In April, 2011 they announced 20,000 new jobs in China!* Does anyone else see something wrong with this picture?

My daddy used to tell me, “Do what I say and not what I do.” I used to tell him that made no sense to me. It still doesn’t. The debts of this country and the world are so great now that we cannot grow our way out of this mess. But it doesn’t help that we give away our foundation that could at least, help our citizens feed themselves and, dare I say it, continue to consume and bring in tax revenues. I’m not really talking about Boeing paying taxes, they have fancy accountants to help avoid that, but at least we could get some taxes out of the 20,000 workers that they are hiring in…China!