Personal security is paramount. We all want to be safe from danger. Violent and armed individuals attacking you or your family is perhaps one of the most horrible things imaginable. No one wants this. The sad truth is, however, that violence and robbery and murder happen every day in this country. You may not give it much thought but you should have gold as part of your security plan.

Recently, I watched a webinar that Lynette Zang, the Chief Market Analyst at ITM Trading created. The webinar, entitled Day to Day Living in Hyperinflation, is available here. In her webinar, Lynette addresses many interesting topics, but the violence that surrounds economic and societal collapse was not one of them.

“During the time Big Pharma was fighting to keep the opioid supply plentiful and easily accessible, the Centers for Disease Control reported a record number of deaths from opioid overdose – and the figure keeps rising. Today, even the DEA – which continues to keep marijuana on its Schedule 1 drugs of controlled substances – acknowledges that nobody has ever died from a cannabis overdose. The same cannot be said for the half million people who died from opioids over a ten-year period.”

The Sad truth is that millions and millions of Americans are addicted to opioids. Just so we are clear, an opioid is the pharmaceutical derivative akin to heroin. Oxycontin and Oxycodone are pharmaceutical brand names of common opioids that are heavily abused.

In addition to basically having a nation full of heroin addicts, we also have quite a few people taking prescription antidepressants. These days, quite often students as young as elementary school age are being prescribed antidepressants such as Lexapro and Prozac. Xanax is a common anti-anxiety drug and it is quite addictive. Perhaps worse yet, Adderall is quite common, and Adderall is an amphetamine. Crystal meth and speed are a couple of street names for amphetamine-based drugs.

Both ITM Trading and the author understand that pharmaceuticals can be life-saving and necessary. This is not an article to bash big pharma or healthcare. This article simply seeks to inform the reader of the true situations that surround us.

Gold  Money As Part Of Your Security Plan : Zombies. Really.

I happen to have a very close friend who is a licensed Pharmacy Technician in Phoenix. This friend is the type of person that you like to hire for precise tasks that must be finished quickly and without flaw. As you might imagine, quickly processing prescriptions is one such task. Where others failed or burnt out, my friend shined.

Because my friend is also charismatic and a team player, the management at the company took a liking to her. Eventually, they approached her about training to work at a special facility they had. It was a secret “Black Facility”. The building was really black. And massive, and unmarked as well. The building was extremely automated but unused.

They explained to her that the facility was there for one reason only. The highly automated building would function to process, fill and deliver prescription medication for the Department of Defense and it’s affiliates. Only select people were being considered to cross-train to operate this facility when it came online.

They further explained that in the case of a qualifying event the main office that she regularly worked at would close and cease operation. The available prescription drugs would be funneled to the military and other enforcement agencies while the public prescriptions would not be of priority. Chilling.

So, imagine thousands and thousands of people that are going off of their anti-depressant medication all at the same time. Imagine throngs of ADHD people who all of the sudden can’t get their Adderall fix. Imagine hordes of addicts seeking little bottles of Oxy.

In addition, factor in the number of parents willing to do whatever it takes to just bring home a little insulin to a child slipping into a diabetic coma. Or, perhaps what an adult child might do to procure scarce heart and blood pressure medication for a seriously ill parent.

Demand for pharmaceuticals in this country will outlast supply, that is just how addiction works. It really doesn’t matter what drug someone starts breaking into your house to steal, the fact is someone is trying to break into your house.

Perhaps if you were a drug dealer, you would have countermeasures such as guns in the house and bars on the windows and cameras recording. But, since chances are you are not a drug dealer, you are probably not prepared for your home to be invaded by those looking to steal drugs. When the pharmacy shelves are bare, however, and the pills are no longer being sent through the mail, every house will be a potential target.

After all, according to the statistic that says almost 70% of Americans are on at least one prescription, mathematically every home with two or more people in it has a medicine cabinet with prescription medications. Everyone is a target. Especially perhaps the elderly. Older Americans often have pain medications as well as prescriptions that are vital to living with specific health conditions. Both types of medications will be in very high demand, and the elderly often present as easy targets.

Gold As Part Of Your Security Plan : Banks Won’t Help.

Banks have security protocols. I know, I worked at a bank. Several months ago in northern Arizona, someone took a shotgun to a fiber optic cable that connects the little town of Show Low to the banking world. It would take days to restore the connection. Cell phones didn’t work reliably and credit and debit card transactions were not possible at all. The little town had to run on cash, handshakes, and respect.

I don’t have a timeline of events, but I know that the Wells Fargo bank in Show Low closed early that day. If the bank knew that the connection would take days to restore, then the decision to close the bank early makes sense. If they had no idea when the data connection would be restored, then perhaps the decision was made to protect the employees at the bank. In any event, account holders did not have access to their funds and travelers had no way to access their cash or accounts.

There is, however, a little shop outside of Show Low. In that shop, they buy and sell gold and silver coins for cash. If you have gold money as part of your security plan, you have options in times like these, even if there is not a full blown emergency. Cashing in a few silver dollars or a small gold bullion coin will allow you to buy groceries when others are waiting for the bank to re-open before they can eat or buy fuel or buy services.

Banks also have a little thing they call “Bank holidays”. during a bank holiday, the bank is closed and locked up. The ATM’s will likely not be refilled with cash for security measures. Banks are designed and built to serve calm clients, not angry hungry mobs.

In addition, once banks close or go on holiday this interrupts the supply chains and ordering processes of the businesses that deal with the banks. Deposits can’t be made and therefore new wholesale purchases to restock the shelves cannot happen. After long enough, businesses start to close because they either have no more stock or consumers can’t access their funds in the banking system. Danger rises considerably when tensions and tempers flare, and shopkeepers know this. Signs that would normally say “Open” now read “Closed”.

As you probably surmise, gold is only part of a well thought out security plan. Having a small store of food on hand can negate the need to have to procure food during market and banking anomalies. Consider having ways to store and/or purify water readily available too.

Gold As Part Of Your Security Plan : Cash May Not Work.

How much cash are you carrying right now? Less than $100? $100 doesn’t go very far these days, especially in a grocery store. Do you know how much your maximum daily cash withdrawal is at an ATM? What are the cash advance limits on your credit cards? How much cash do you have at home?

The truth is that few Americans carry substantial amounts of cash on a daily basis. As a result, very little cash is actually in circulation. Circulation is the keyword in the last sentence. Cash has to circulate in order to work. If banks are closed for a few days, the available cash will pile up at stores, making them a security risk. Especially relevant is the fact that we live in a society that depends on Just-In-Time inventory strategies.

Most stores hold very little in the way of inventory, especially perishable inventory. If deliveries don’t happen on a regular schedule shelves go bare very quickly. If the digital banking system ceases to function, even for just a few days, the available cash in circulation may just simply pile up at stores making wholesale ordering challenging since wholesalers generally don’t have Cash On Delivery systems in place. Just trying to ship, truck, and deliver food products during a financial crisis is a dangerous business.

How Much Cash Is There?

Some estimates say only 3% to 5% of dollars actually exist as cash. Those critical of the financial system think the number is much lower. Realistically, this means that there is not nearly enough printed cash in circulation to allow commerce to continue unfettered if solely based on cash transactions.

While there may not be enough cash in circulation to effect commerce effectively in the event of a long-term bank holiday, there are plenty of gold and silver coins ready to go to work. Junk bags of silver are a very common and popular way to hold barterable wealth. Junk silver is another term for old US silver coins that were most commonly struck before 1964. Junk silver coins are usually 90% silver, though other lesser alloys were also used.

Small one-ounce gold coins and even smaller gold coins known as “fractionals” are also very common in the gold investment world. When cash is scarce and business has to happen, gold and silver, as well as other items, will fill the void. The only question remaining is what value will one ounce of gold or one ounce of silver trade at? History has shown us time and time again that as confidence in a paper currency collapses gold and silver prices skyrocket.

Gold Money As Part Of Your Security Plan : Own Gold.

Perhaps you are not as secure as you thought. Maybe this article has caused you to see some things in a new light. The truth is when mass tragedy strikes the reasons are usually rather unique and stealthy. Only those that survive can recount the particulars.

We know that gold as a currency is a survivor. Gold has been a store of value for thousands of years during which time thousands of paper currencies have come and gone, becoming completely worthless. Gold and silver coins are portable wealth that you can count on for security. Contact ITM Trading today to discuss adding fractional gold and silver coins to your safety plan. 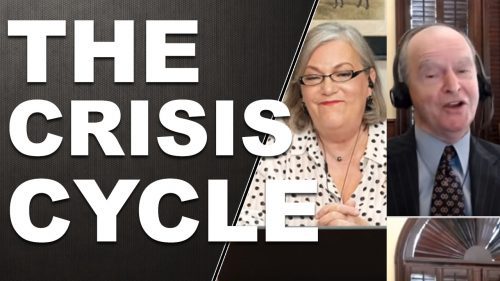