It’s time for Davos, the world economic forum, again. But this year is different. Gone is the hubris of the elite and in its place is fear. George Soros said, “At times like these, survival is the most important thing.” According to an article in Reuters, he feels that the world faces one of the most dangerous times in modern history and predicts riots on the streets that will lead to dramatically curtailed civil liberties. The global economic system could even collapse altogether. Wow, he actually said it. Unfortunately he could be right.

The Federal Reserve has forecast that rates could stay low for another three years. This is clearly an indication that the Fed expects a sluggish economy for some time to come. With this announcement the US dollar index dropped 34 basis points and spot gold increased $44.80 and spot silver increased $1.16. The savers and those on fixed income are in trouble as inflation will continue to erode purchasing power. In search of yield many may shift money into stocks or junk bonds to chase returns. Risk on.

Moody’s has now downgraded the general obligation bonds of both Illinois and Connecticut and indicated that they are beginning to accelerate their downgrading of US municipal debt. They cite higher pension costs and lower state revenues as the reason for the current downgrades, and warn of more state downgrades to come. This is significant because GO (General Obligation) bonds are considered safer than Revenue bonds, since principal and interest payments come out of general funds. Federal, state and municipal governments generate income through taxation.

According to the IMF’s current Global Financial Stability Report “The euro area debt crisis has intensified further, requiring urgent action to prevent highly destabilizing outcomes.” In my opinion, they are referring to the CDS (Credit Default Swap) issue. As a reminder, the LTRO (Long Term Recovery Operation), is the ECB’s money creation out of thin air, bank saving, inflation creating, taxpayer wealth transfer mechanism which is scheduled to begin its second round of operations on February 29th. Rumor has it that they anticipate a $1 trillion injection. What they are trying to do is take bank failure off the table by giving them all the cash they need to payout those CDS’s (Credit Default Swaps) in the case of a Greek bond default. The following chart shows you when those bonds come due. 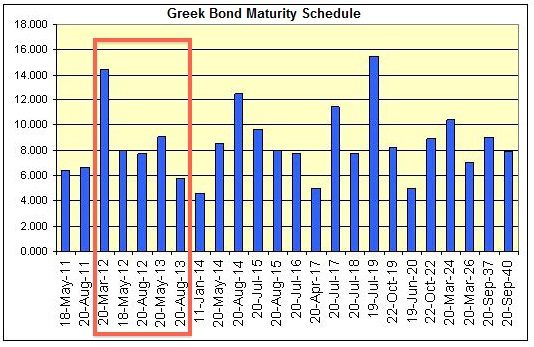 The IMF warned that the Eurozone’s temporary bailout fund, the EFSF and the ECB (European Central Bank) may be forced to take losses on Greek bonds that were recently purchased. The ECB is fighting this so we shall see.

There is $8.3 trillion more debt plus interest coming due in the largest economies globally this year, according to Bloomberg. Who will buy all of this debt?

AND THE BAILOUT GOES ON

Tokyo Electric Power Co, owner of Fukushima, Japan’s stricken nuclear plant, is getting a $13bln bailout in one of the world’s biggest bailouts outside the banking sector. But what’s another $13bln when your debt to GDP ratio is already higher than 200%.

India will use gold instead of US Dollars to buy Iranian oil and it is expected that China will follow suit since they just signed a currency swap deal with the Bank of the United Arab Emirates (UAE) this week. Of course we are talking about Iran, whose economy is currently experiencing hyper inflation with prices almost doubling daily thanks in part to economic sanctions against them. But the use of gold to buy oil does several things;

You can see from the charts below that the markets like Bernanke’s promise to keep rates low closing the week 12660.46. Let’s see next week if the Dow can break above resistance and test levels last seen last May. 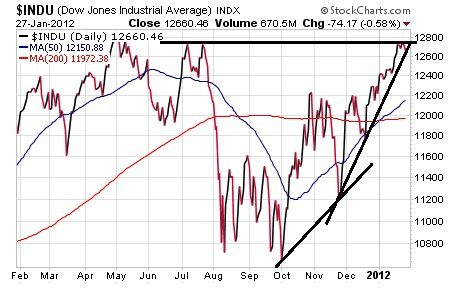 The dollar chart below tells a different story. It tells us more money printing, easing and currency devaluation. Having broken below support, the dollar is now trading in a lower trading range. 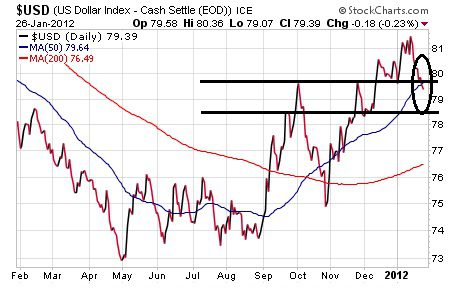 Both spot gold and spot silver broke above current resistance levels and are now inside a higher trading range. This is the response to the Fed’s promise to continue to accommodate the banks and government through inflation. 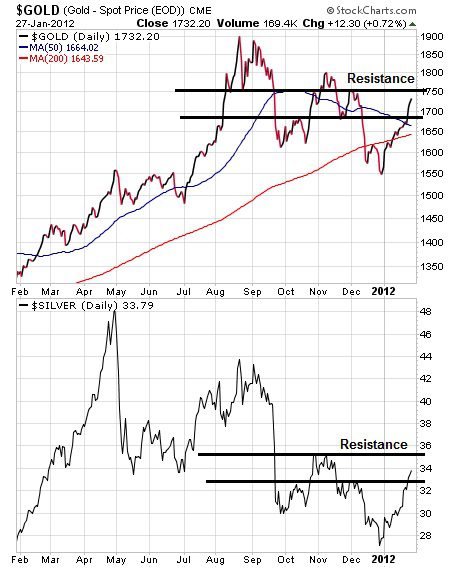 In the physical metals world, both bullion and numismatic prices increased this week, with numismatic price increases coming in today. Availability is good in both gold and silver bullion, with more silver than gold sales this week.

It is very important that you know who you are dealing with when positioning into the physical metals. When something seems super cheap there is usually a reason. Effective Feb 20th, sellers on eBay.com may no longer list replica US, world and other historic coins of any kind. The policy change follows discussions between eBay and PNG (Professional Numismatics Guild). PNG President, Jeffrey Bernberg said, “eBay is working closely with law enforcement and third-party grading services – as well as using a number of internal tools – to review listings that may violate eBay policy prohibiting counterfeit coins.”

That wraps up the wrap up. What an interesting week of developments as we march closer to the potential CDS fallout. I know I’m talking about this a lot and of course I can be wrong since I do not control the markets. It is simply that I cannot see a way out of this $32trn explosion unless there is no default. March 20th is the trigger date, so put that on your calendar and we will continue to watch the markets for you and give you a heads up. 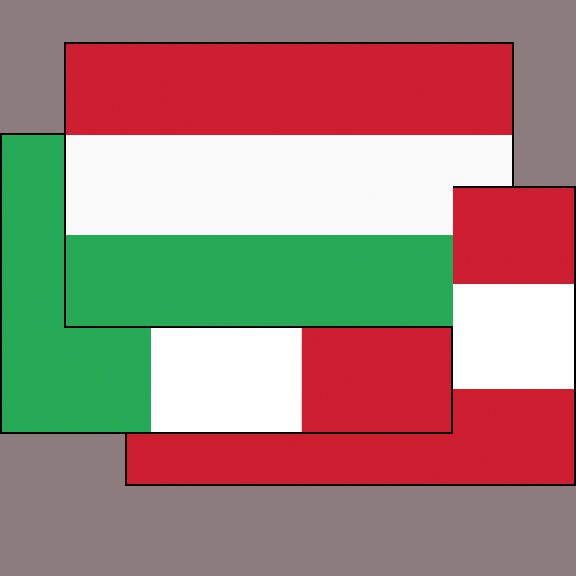 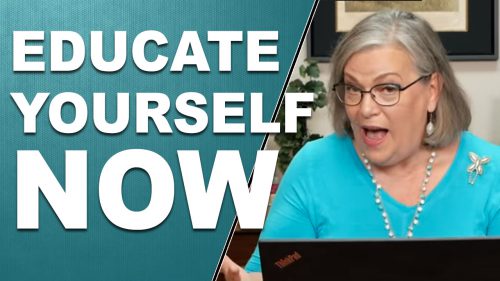 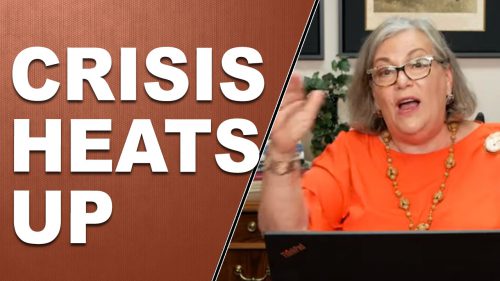