CAN HYPERINFLATION HAPPEN IN AMERICA?
Most people don’t believe that the US dollar could lose all value. After all, it’s been around our entire lives. But so has inflation. Personal experience proves that fiat money inflation makes everything we buy cost more dollars over time. That’s because fiat money is supported by the “Full faith and credit of the government”, meaning the government’s ability to accumulate more debt.
Normally, with debt comes interest. When interest on the debt eats most or all income, inflated fiat money assets begin to deflate. There is only one way to fight deflation and that’s with inflation. Thus the global central bankers’ extreme experiments in money printing and interest rates.

What is the most likely outcome of these central banker experiments? Repetitive historic patterns tell us that hyperinflation is the most likely outcome.
The following graph shows United States inflation over the past 241 years. Look at the tiny blips of hyperinflation during the Revolutionary War, War of 1812 and the Civil War. During these wars the government currency lost all value in a blaze of hyperinflation, but they only look tiny as compared to the inflation we’ve experienced since the Federal Reserve was given control of our monetary system. 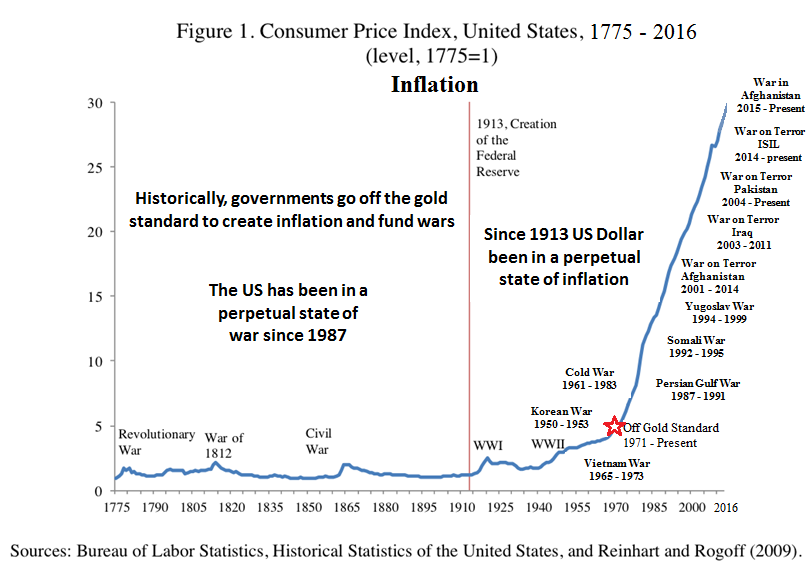 The only difference between inflation and hyperinflation is the speed of the inflation. Fiat war money inflation used to heat up rapidly, confidence in government money was lost and gold money was used to restore public confidence. In addition, there used to be decades between wars, so the gold money used supported monetary healing.

But the US has been in a perpetual state of war since 1987 and inflation has been compounding at an exponential rate since 1971. Which is why, according the Federal Reserve, today, there is only 4 cents of purchasing power value left in the original dollar. And yet the central bankers’ cry for even more inflation. 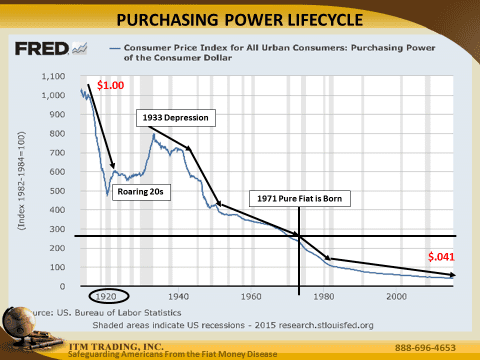 In addition, the Federal Reserve has already created monetary hyperinflation, as witnessed in the following graph. Never before has base money surpassed the other forms of money supply. The only reason the economy is not hyper inflating is because this money is sitting as excess reserves in the banking system. 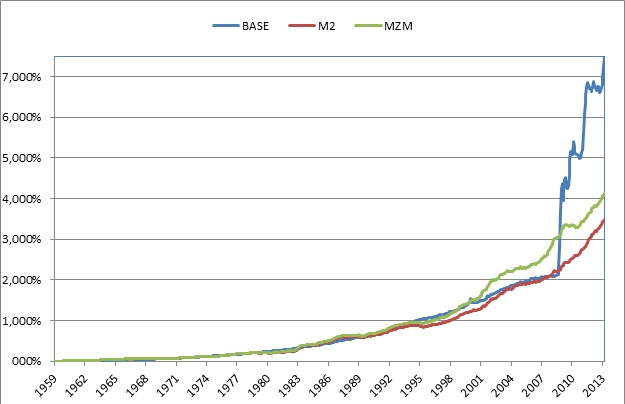 Negative interest rates are attempting to coax those Swiss, Euro, Yen and Danish excess reserves into the respective economies, without luck. Helicopter money, which is given directly to those who will spend it, is now being routinely discussed by central bankers as an option to create desired inflation. Bail in laws are in place, markets are making all-time highs and bond interest rates are at all-time lows. Even Alan Greenspan says these are the worst economic times of his career and calls for a return to the gold standard as it was prior to 1913.

The BIS, IMF and World Bank talk about the fragility of the global financial system and now the Brexit made it obvious that public confidence in governments is deteriorating. In fact, in the US, according to a recent Pew Research report, only 19% of those surveyed trusts the government. 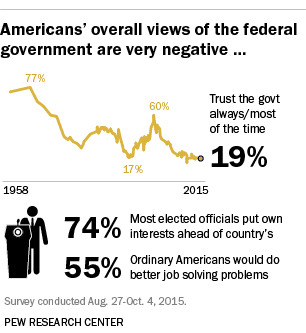 Yet the public still trusts intangible fiat money products, having been taught that there is nowhere else to hold wealth. It is this confidence that allows the continuation of current fiat money system and why there is massive wealth transfer with every financial crisis.

I expect this next financial crisis to wake up the sleeping public, but it may well be too late to protect your wealth then. This time is different because, according to the most current IMF Financial Stability report, central bankers are running out of options. Bail-in anyone? Helicopter money? The financial system “Reset” they continue to discuss? That’s the US dollar losing the last 4 cents of purchasing power value, but the most likely outcome is that this last part happens quickly…that’s hyperinflation and yes, it can happen here.

Disclaimer: The information in this Webinar has been carefully compiled from sources believed to be reliable, but the accuracy of the information is not guaranteed. The author, Lynette Zang was a licensed investment advisor but no longer maintains those licenses. This broadcast is not intended as investment advice. The opinions expressed are those of the author. Neither Lynette Zang nor ITM Trading can guarantee that any products offered by ITM will rise in value. You should be aware that prices will fluctuate and may go down as well as up. Strategies mentioned in this webinar may not be suitable for you. Past performance is not indication of future profits. Before purchasing coins you should read ITM’s Risk Information and Purchase Policy documents. Coins should be considered a long term hold for a portion of your investment portfolio. If you have any tax or other questions please consult a financial professional. ITM recommends that 5 to 20% of your overall investment portfolio be placed in precious metals, however the decision as to how much to allocate is strictly up to you and/or your financial adviser.

Watch 2008 Was Just A Warning – The Video That Started It All.