Bernanke is maintaining a highly accommodative stance “in light of the persistence of factors restraining the pace of recovery and the ongoing risk to the economic outlook.” The problem is that history has shown us that this stance has not worked since the 1980’s when we transitioned into a debtor nation from a creditor nation.

The following charts show you monetary velocity (economic activity) and the growth of debt for the federal government, state and municipal governments, as well as corporations and individuals. Notice that as the debt has grown, monetary velocity has fallen in a clear series of lower highs, which is indicative of a negative trend. This is because we have all spent tomorrows earnings yesterday, and nothing is left to create that economic stimulation today.

Since the only tool they have left is more debt, and we can see that that it isn’t working anymore, we must be insane to think that more debt will fix the debt problem. So let’s look at the global insanity this week.

Could Student Loans Become the Next Bailout?
Since the government (taxpayers) began to guarantee student loan debt (80% as of last year), that debt has grown to roughly $1tn which is greater than either auto or credit-card debt and second only to mortgage debt. Student loan debt is one of the most difficult loan types to forgive or discharge in bankruptcy.

Shanghai Futures Exchange (SHFE)
SHFE, China’s largest market for commodities, recently announced the upcoming launch of a silver futures contract. This may give China more impact on the spot price of silver, which is primarily a digital contract and in no way reflects the true fundamental value of the physical metal, even if at the moment silver is tied to that number. Fundamental value is based upon the assets primary function and physical silver has two; as the secondary currency metal and as an industrial metal.

Chinese Banks Now Allowed to Short the US Dollar
As of April 16, Chinese banks will have the ability to sell U.S. dollars they do not have. The change coincides with the widening of the Yuan’s daily trading range to 1% and is designed to “promote price discovery of the Yuan exchange rate” according to the State Administration of Foreign Exchange (SAFE).

China Plans to Avoid U.S. Financial Sanctions Against Iranian Oil
Beijing is planning to pay for Iranian oil with gold, bypassing U.S. Sanctions that go into affect on June 28, 1012 that are designed to force countries to curtail the amount of oil they buy from Iran.
Countries like China, Russia and India, all large trading partners to Iran, have used gold and food to barter with and avoid those sanctions as well as bypass the U.S. dollar. “Bi-lateral trade agreements” that bypass the use of U.S. Dollars in transactions have been on the increase since 2005 and undermine the U.S. Dollar position as “The World Reserve Currency” which is not a good thing for those of us forced to use the U.S. Dollar as our tool of barter.

To listen to an excellent Jim Sinclair interview on the subject follow this link:
http://kingworldnews.com/kingworldnews/Broadcast/Entries/2012/4/25_Jim_Sinclair.html

Dutch government collapses over debt woes
Prime Minister Mark Rutte and his Cabinet quit after talks on the new austerity package collapsed and one day after the first round election victory of France’s socialist candidate whose platform is more on economic growth and less austerity. That means more debt in an attempt to stimulate economic growth. Refer to the charts above, it clearly does not work.

In 2001 Argentina’s devalued its currency, defaulted on its government debt and confiscated private pension plans which it did again in 2008.

Having twice suffered bouts of hyperinflation in the late 1980’s and early 2000’s, Argentinians are sensitive to inflation. Today, Argentina is again devaluing its currency at a rapid rate. Official inflation stands at 9.7% but 24.4% and cumulative inflation since the beginning of 2007 at 137%, are more accurate numbers according to PriceStats, a specialist provider of global inflation rates. The government is taking extraordinary measures to hide it by levying fines and threats of prosecution to try to stop independent economists from publishing accurate inflation numbers.

Governments and Central Banks Add More Gold to Reserves
IMF data just released shows that governments and central banks continue to diversify their reserves into more gold. Argentina added 13% and Mexico 16%. In fact central banks added 439.7 tonnes last year, the most in almost five decades and they are on track to do the same this year. The following table shows you the reported increases according to the IMF. 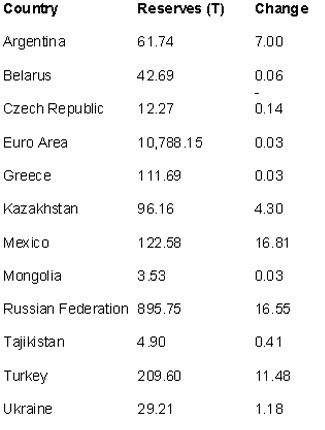 The interesting thing is that these additions are occurring as participation by individual investors is slowing. Do you think central banks know something the general public doesn’t?

Currencies are created from debt (sovereign bonds) and supported by the ability to create more debt (full faith and credit). Gold is the only currency without debt, whose primary function is to deal with all of the debt those governments are growing.

So there you have it, governments are buying gold because they know they are severely weakening their currencies by printing them into oblivion.

Goods Producing (DJIA) vs. Goods Moving (TRAN) Stocks
It appears that there is a head and shoulder top forming on the Dow as you can see below, with the final shoulder in possible conclusion. In the mean time the Transportation Average is possibly forming a wedge, with lower highs and higher lows. The market continues to look for support from the Fed in the form of QE (quantitative easing) and frankly, I don’t see how they can stop. But if the final shoulder concludes with the Dow falling to 12,750 we could see a bigger correction in the cards. Personally, I remain cautious on the stock market and suggest, if you still own stocks, that you protect them with trailing stop losses, or other conservative strategies.

The US Dollar vs. the Euro Dollar
Look at the charts below and there you see the lovely wedge again. These charts are fiat currency versus fiat currency but I think it’s pretty amazing that with all the problems in Europe that it still takes $1.32 to buy 1 Euro. I thought we would see the conclusion of the wedge this week, but that has not been the case. We will see what happens this week. 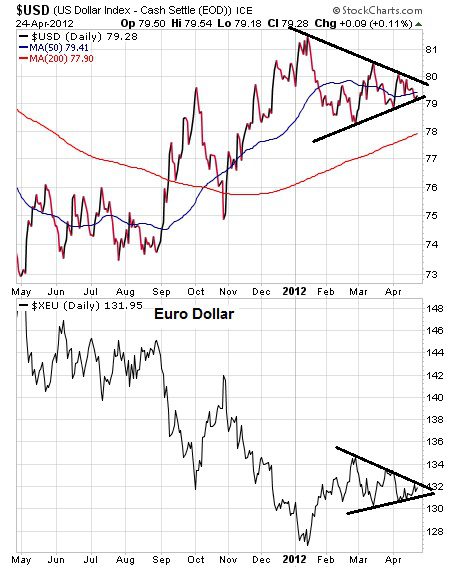 Spot Gold and Spot Silver
This week the 50 day moving average crossed below the 200 day moving average. This has certainly happened before during this 11 year positive trend. Now we will have to see if this move is pervasive or just a short term correction. The next support on gold is $1,622. Silver is sitting right on support at $30. Anything can happen with digital markets since they are a trading market and easy to manipulate, but the long term trend remains intact because the long term negative trend in the fiat currencies remain intact.

And Now the Numismatics
This was an up week in the numismatic market in an ongoing cup formation. This is extremely powerful and positive action, and a wonderful opportunity to buy in or add to your portfolio somewhere near a low.

I cannot stress enough that physical gold and silver are not trading vehicles but rather an insurance tool against flagrant government and central bank abuse of our purchasing power and our wealth.

It is their job to craft how you think and therefore how you behave. After all, it is easier if you volunteer your wealth by remaining in U.S. Dollar based assets which are outside of your control.

It is our job to show you how to look just a little below the surface so you can see the truth, regardless of what anyone says. The truth is asking you to change your paradigm, something not easy for most people. The truth tells you that what you have been raised to believe is that conservative government bonds, stocks, and cash is actually highly risky. This is because the foundation of those investments is debt and debt is in a negative trend.

If bonds and stocks are going up in terms of dollars, it is only because the dollar is going down in terms of purchasing power. Central banks know this. That is why they are converting as much of their reserves into gold as quickly as they can. They prefer to do this as cheaply as possible and have the easy ability to control the spot price simply because you do not have to own the physical metal in order to sell it.

We are in a battle against a globally coordinated effort to transfer wealth. You are the steward of your family’s future. It is your job to form an educated opinion based upon the truth and we are here to help you.

If you would like to understand more, please call your ITM representative and they will set up a teleconference. We will send you links and charts just before the meeting and give you the tools to track the truth independent of what anyone might say. Please take advantage of this opportunity, it’s knocking.

We are here to be of service.
Lynette 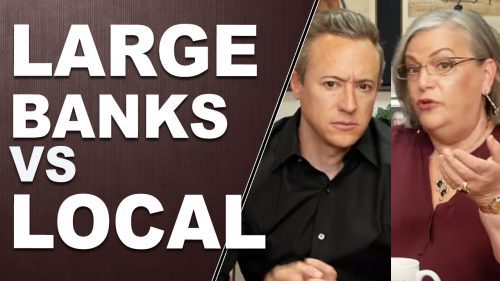